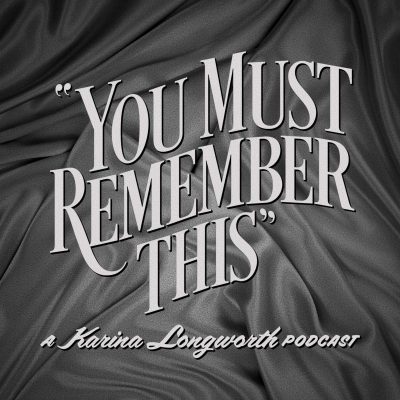 For someone like me, who’s spent most of her life obsessed with the stars, stories and minutiae of Old Hollywood, something like You Must Remember This is a godsend. Like other popular well-researched podcasts that engage listeners in fascinating true life tales over the course of multiple episodes (Serial, etc.),  You Must Remember This  gives it audience incredible and intimate access to people at the forefront and on the fringes of the movie world throughout the 20thcentury. While the podcast might cover Howard Hughes, Charles Manson, Thelma Todd, Mae West or Elizabeth Taylor, the star of every episode is really Karina Longworth, the young woman who produces, writes and narrates the whole enchilada. Using a distinctive intonation that is somehow simultaneously formal and cozy, Katrina weaves narratives familiar and obscure, but always mesmerizing. (I’m never able to pause a podcast; I always have to listen to the end in one sitting, and they aren’t shirt!)

Katrina started You Must Remember This back in 2014 because “I wanted an excuse to research stories from Hollywood history more extensively than most of my freelance opportunities would allow but without the commitment of writing a book.”  The podcast platform also allowed the sometimes ‘prickly’ Longworth to “do something exactly the way I wanted to do it, for better or for worse.”   Like other passionate podcasters before her, Katrina wrote a script, borrowed some recording equipment and taught herself how to use GarageBand. Ten days later she had a first episode, and the rest is history (literally).

Before finding fame in podcasting, Longworth was an arts journalist and spent several years as the film critic on LA Weekly. Now able to earn a good living solely in podcasting, she’s able to devote most f other time to her first love, research. As impressed as I am by the podcast’s product, its process is even more remarkable. Using her own considerable library as well as making use of multiple archives and resources, Katrina spends weeks, sometimes even  months, researching a single episode. Despite being busy and sought-after (she was recently profiled in The Gentlewoman magazine), Katrina was kind enough to let this fangirl press her for more details:

DIXIE: Katrina, I’ve read “why” you started the podcast on your website. Can you tell me more about the “why-behind-the-why”? Why is researching Hollywood history so important and powerful for you?

KATRINA: The history of Hollywood is simply the thing I’ve been most interested in for most of my life. I was lucky to be able to figure out a way to turn my primary interest into a job. To me, Hollywood history is American history, cultural history, social history…and we can start understanding why the world we live in is the way it is, and why media is the way it is in the present day, by unpacking the past.

DIXIE: How do you research the show? It’s clear you have a wide range of diverse sources!

KATRINA: The first thing I do when researching anything is to take inventory of every book on the subject. I read everything I can get my hands on and try to divide the undisputed facts from the spin and conflicting perspectives. I figure out what my questions are and then I look for the sources that will help me answer those questions.

DIXIE: Researching and creating content is obviously the prime driver behind your podcast, but what role do the listeners play? Are you consciously aware of the audience? How much is telling other people these stories a motivator?

KATRINA: I hope that listeners of the podcast are inspired to watch the films that I discuss. But I don’t think about them when I’m crafting the shows. I solely explore what I’m interested in.

DIXIE: Do you engage much with your audience? How do you connect? Any advice for other podcasters about the best way to engage with – or not engage with – listeners?

KATRINA: I don’t engage as much as I probably should. I’m too busy making the show, which is extremely time consuming and doesn’t leave a lot of me leftover for engagement.

DIXIE: Any advice for podcasters about using audio clips and pre-recorded music? What equipment do you use to record and edit?

KATRINA: All the music I use in the body of the show comes from licensed and/or royalty free libraries. My use of film clips falls under any definition of fair use. I use a Rode NT1 mic, plugged into an Avid Mbox, plugged into a MacMini or iMac. I record using GarageBand. I edited episodes 1-55 myself using GarageBand. Episodes 56-86 were edited by Henry Molofsky. The more recent episodes have been edited by Sam Dingman and Jacob Smith of Panoply/Slate Podcasts.

DIXIE: How conscious are you of maintaining/developing/building/marketing a “You Must Remember This” brand?

KATRINA: Not very. I just want enough people to listen to the show to make it cost effective to produce—which, since late 2015, it has been. I put all of my energy into making the show itself as strong as it could be. I don’t think it really needs a “brand” other than “high-quality.”

DIXIE: How do you market the podcast? (Or do you?) What role does social media play?

KATRINA: I don’t personally do much of anything to market the podcast. My social media assistant posts on Facebook, Twitter and Instagram, and we have a website and a Patreon. But again, I’ve really focused on making the content as strong as it could be, which I think is more responsible for people listening to the show than anything I have or could be doing in the realm of marketing.

Do yourself a favor and check out “You Must Remember This”.  And if you want more,  there’s Katrina’s book, Seduction: Sex, Lies and Stardom in Howard Hughes’s Hollywood. I’ve heard some of the story on her podcast and it is AMAZE-ing.

This piece was originally published in the Ossa Collective.