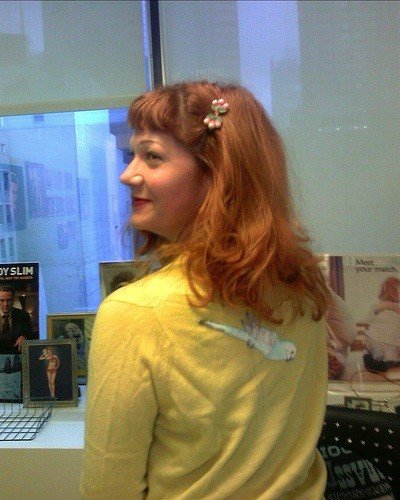 When people meet you, people inevitably ask you what you do.  Me, I like to ask things like, “What’s the best advice you’ve ever received?” or “what book has had the biggest impact on you?” but that’s because I don’t care all that much about what people do.  I’m more interested in who they are, and job titles don’t always get you there.  But I get it, they are a shortcut.  I’d had a Director title for one major television network or another for 30 years, so when people inevitably asked me what I did, I’d mention the title, rather than bore them with an explanation about what I actually did.  When my job title included words like “MTV Networks”, “Editorial”, “Nickelodeon” or “Oprah”, people didn’t generally walk away.  That was nice.  Now, when people ask me what I do, I have no title to offer up.  And no matter how I phrase what I do, I often see it set in.  A restlessness, an eye glaze-over, a look past my shoulder to see if someone not so pitiably title-less might be roaming about somewhere.  It’s OK, but it less nice.

Back in the day I traveled a lot for public television (“National Project Director” don’tcha know), and I knew most airports by heart.  Hours and hours spent in lounges and waiting areas, I met lots of people, and at some point the more extroverted among us would end up swapping titles.  Except the man in the uniform, I could tell he was a pilot.  We got to talking and I got to asking him about the best cities or something and he told me he was retiring in 3 days.  I’d never seen a white gentile male look so distraught in a public place.  Maybe it was the enormity of just how non-threatening I am, or the proximity to the day, but his sadness was palpable as he shared his dilemma.  He’d been a pilot his entire adult life, so what would he be if he weren’t a pilot?  I understood what he meant.  He wouldn’t have his uniform, he wouldn’t have his job, he wouldn’t have his title.  He wouldn’t have his him.  So, what would he be?  WHO would he be?

Most of us don’t relinquish our wings when we relinquish our titles, but metaphorically, maybe we do.  If you’ve primarily identified your ‘you’ with your job, you might feel as devastated as that poor pilot sitting at that bar drinking his ginger ale.  (Let’s hope it was ginger ale.)  Fortunately for me, while I never got blasé about having a cool big city job with a cool big city title, it never defined me to me, even if it did to people at parties or airports.  But for too many women who all of a sudden find themselves caught without their title, it can feel like being caught without your clothes on.  You can feel a little embarrassed, and cold.

Before you get the shivers, it’s important to be prepared for that naked day.  Before you find yourself not working for an outfit, pack your backpack so you feel good and comfortable, even proud, in an outfit of your choosing.  (Ok, this metaphor has gotten weird and annoying, but you get what I’m saying, right?)  Start thinking about who you are without your title, without your job.  Think about what you bring to any table, what makes you special, what makes you you.  Start thinking about what you’ve always wanted to do, whom you’ve always wanted to serve, things you’ve always wanted to explore.  Maybe this chapter will mean a new job, a new title, a new business of your own.  Or, it might mean a patchwork of work…and volunteering, and learning, experimenting.  It might mean a hammock in a tropical locale, or a cottage with a garden.  It might mean anything.

Whatever it means, don’t be intimidated when someone inevitably asks you “what you do”.  Be ready to answer them with an enthusiastic recital of all you’re doing – or a beatific happy answer about all you’re no longer doing.  Just own who you are, and don’t worry about “what” you are.  Or just tell them, “It’s a secret”, “It’s classified” or, “Sorry, you couldn’t handle it.”  Or just make something up.  Not being in business is nobody’s business, and who you are is only yours.