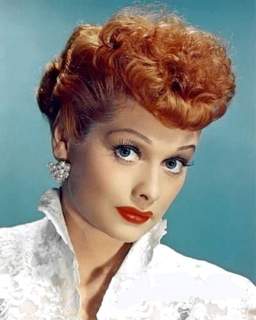 For several generations I Love Lucy has served as a sort of televisual I-Ching. For millions of young girls, I Love Lucy has been a redhead-led Rosetta Stone, a valuable key offering guidance on such timeless questions as “What if my best friend is wearing a dress identical to mine on television?” “Is my husband trying to kill me?” Or, “How do I meet William Holden?”

Informing the popular imagination for over half a century now, I Love Lucy premiered in 1951, and we haven’t been loveless since. Presciently shot on film rather than in Kinescope, I Love Lucy has stood the test of time, and nearly 200 episodes have been rerun (and rerun, and rerun) all over the globe. The series ran under various guises until 1957, won several Emmy® awards, and influenced situation comedies and captured our hearts for decades. For those of us children who suckled on the tele-teat of Lucyism, we discovered a lot of information and inspiration on:

To many, I Love Lucy is the story of an enduring marital relationship, one that can weather familiar domestic dilemmas like money, mothers-in-law, jealousy, power struggles, thwarted dreams, and Tennessee Ernie Ford. Lucy, a wifely Everywoman, had the same hopes and dreams of housewives the world over: trick your husband into getting you a mink coat, make him pay you more compliments, insinuate yourself into his film debut.

Generally, what Lucy wanted was to play a less passive role, to be more an actor than acted upon. (Much like the real Lucille Ball, who tired of being ignored by Hollywood’s big studio system, and took her destiny into her own hands.) She wanted attention – and what’s wrong with that? We all want it; Lucy was just very upfront and focused about getting it. A proto-feminist heroine, Lucy refused to be relegated to good little girl housewife and the invisibility and powerlessness that defined the role. Not one to repress her insecurities, Lucy tackled them head-on, and since her fears were our fears, we rejoiced in her flagrant disregard for propriety in her quest for inclusion. For example, when Lucy wonders whether her husband would be unfaithful, she eschews the obvious approach and dons a black wig, then tries to trick and pick up Ricky with her ersatz Gina Lollobrigida disguise. When she fears Ricky’s violent reaction when he sees the bill for the couture Don Loper dress she mistakenly purchased, she completely sidesteps domestic battery by getting herself so sunburned he’ll refrain from laying his conga- pounding hands upon her. That’s ingenuity!

Perhaps the most touching episode has Lucy searching for a way to let Ricky know there’s a wee Ricardo in the oven. After several unsuccessful attempts, she goes “down to the club” and, unbeknownst to Ricky, submits a song request for “We’re Having a Baby (My Baby and Me).” Ricky strolls through the audience as he sings, eventually realizing the baby in question is his! The obvious emotion between the real Lucy and Desi is evident on their fictional counterparts’ teary faces.

Though some saw Lucy as a show about marriage, it’s just as much about friendship. Lucy and Ethel are seminal TV female friends: close, conspiratorial, competitive and creative. Together they paved the way for resourceful duos like Laverne and Shirley, Roseanne and Jackie, Edina and Patsy, and Will and Grace. They did occasionally undermine one another; there was a nasty election incident, not to mention those competing diners: “Little Bit of Cuba” and “Big Hunk of America.” but mostly the girls were there for each other. There to play martians on the observation deck of The Empire State Building. There to assume the roles of Maharincesses of Franistan (don’t ask.) There to steal John Wayne’s footprints at Graumann’s Chinese Theatre. Though in real life Lucy had Vivian Vance contractually obliged to remain on the zaftig side, this apparently never kept Vivian from being friends with Lucy off-screen as well as on.

Where does one begin? Lucy’s black cigarette pants with the ballerina flats. Her charming smock blouses obscuring the unborn Little Ricky. Ethel’s cute housedresses. Fred’s pants. (The belt line was eerily close to his nipples!) Ricky’s cool two-tone short jackets, and his Cuban heels. (Seriously – check out Desi’s shoes -there’s like a a three inch lift!) Lucy and her cohorts donned so many great outfits, but the standouts include:

Though destiny made her a housewife, sheer force of will made Lucy Ricardo – at various times – a model, circus performer, movie star, saxophonist, sculptor, ballerina, TV pitchwoman and candy factory worker. Undeterred by her compete lack of talent and experience, Lucy’s dogged pursuit of the show biz spotlight is an inspiration to us all.

Stuck for what to do in other states and foreign lands? Let Lucy be your guide! When in Hollywood, why not climb into a movie star’s yard for that extra-special, one-of-a-kind souvenir? When in Gay Paree, be sure and check out the latest fashions. (Just be careful you’re not rooked into wearing a horse’s feedbag.) And when in London, do meet the queen. (Don’t forget to practice your curtsy!)

As you can see, I Love Lucy can function as a travel guide, aa marriage manual, or a comprehensive fashion template for myriad activities, including crawling out on a ledge dressed as Superman. So next time you find yourself in a jam, look to the wit and wisdom of the Lucy canon – and all will be revealed.

I LOVE LUCY: THE CLASSIC MOMENTS by Tom Watson
This is the “Official I Love Lucy Scrapbook,” perfect for the fan who wants to stroll down memory lane, reliving highlights of each episode through photos and interesting factoids. Not an in-depth scholarly theses, just a fun, nostalgic, coffee table-ready look at what we loved about Lucy and the gang in the first place.

LUCILLE: THE LIFE OF LUCILLE BALL by Kathleen Brady
This is the definitive biography of the woman behind the icon. Perspectives from stars like Bob Hope and Katharine Hepburn give fans a unique look at a complex woman whose life was as strange, but not always as lighthearted, as that of the character she portrayed. Though a must for fans, this profile is also of brad interest to anyone wanting an intimate glimpse into several eras and facets of 20th century show business.

LAUGH, LUCK…AND LUCY: How I Came to Create the Most Popular Sitcom of All Time by Jess Oppenheimer
Only serious Lucy acolytes need apply! This autobiography from the producer and head writer of I Love Lucy offers a wealth of behind-the-scenes stories, photos, and even an audio compact disk for those hankering for the lost episodes. Although fascinating and invaluable to some, it may be too much (and too self-serving for the casual Lucy watcher.

A version of this article was first published in Atomic Magazine, Fall/Winter 2001 Issue No. 10