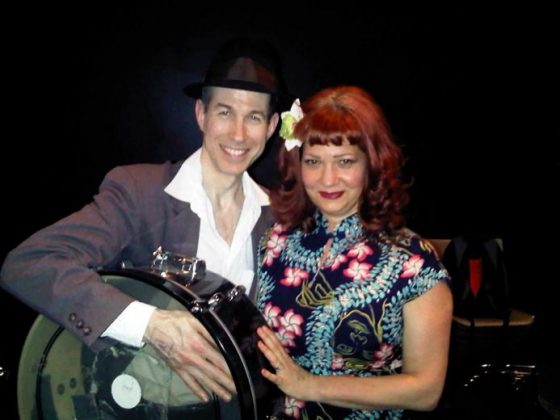 (This piece was written several years ago, when I frequently wore Hawaiian dresses to dinner, to work, to vote, etc. Sadly, my sarong days are pretty much over, and I’ve sold almost all of them to people who can enjoy them like I did.)

Why all the frond-fondling finery when the closest I ever get to a luau is briskly walking by the Hawaiian Tropic Zone restaurant near Times Sqaure? Simple, because rockin’ tropic frocks walks that fine line between glamour and costume, allowing one to inject much—needed exoticism into everyday humdrummery. Dressing like a showgirl, trapeze artist, or coming to work in a peignoir is generally frowned upon, so we dames must look elsewhere for garb befitting our imagination and our curves.  When done well, dresses with giant blossoms and hibiscuses (hibiscusi?) bring a uniquely festive glamour to clothes. But the prints must be done well, which is why I’m obsessed with vintage Hawaiian and Pan-Asian clothes.

Starting in the 1930’s, Hawaiian prints and tropical styling became a go-to get-up for vintage vixens. Dorothy Lamour made a big splash in the 1938 movie Jungle Princess, single-handedly adding the word “sarong” to Americans’ vocabulary. (Though it wasn’t exactly her hand that did it.) The Forties brought Pearl Harbor and our boys stationed in tropical locales far and wide. Eventually Hawaii became the 50th state and vacationers’ suitcases came back overstuffed with shirts and muumuus that seemed like such good ideas back on Waikiki.

Hawaiian prints, like Hawaii itself, are an accessible exotic. The hula (and hula hoops, for that matter) is a perfectly innocent and acceptable form of hip-rolling. Wiggling and grinding can be illicit, but slap on a grass skirt and all of a sudden it’s kinda cute, and even elegant. Wearing beautiful Polynesian and Hawaiian-ish prints is a non-threatening, festive kind of exoticism. Plus, they’re easy and fun to wear! Form-fitting sundresses and cheongsams are extremely figure-flattering no matter what figure you’re trying to flatter, and muumuus are extremely bloat-friendly.

I’ve gotten into collecting dresses made by Alfred Shaheen, especially his Surf ‘n Sand line. Yes, it’s another huge money suck for me (see my post on ebaying). But they’re just so darn Dorothy Lamourthy, twirly, and drinks with umbrellas-tastic! Perfect for dames who want a down-to-earth exotic, fun, rockabilly look that isn’t retro-ying-too-hard.