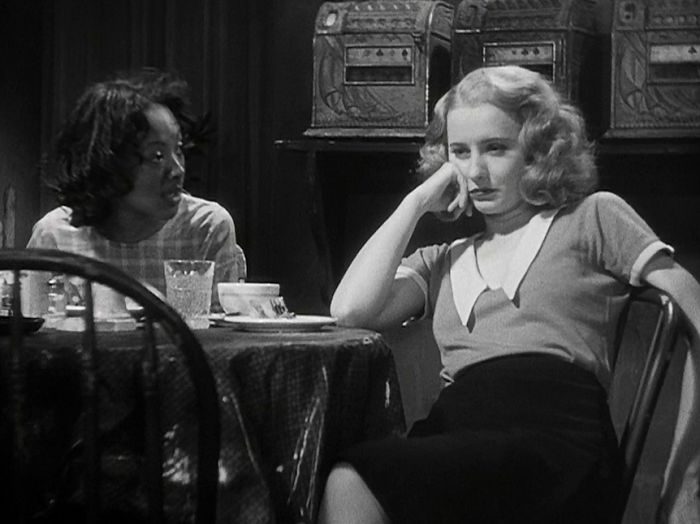 Here’s the third and last chapter in my hard-wrought Top Ten Dame Movies list. It’s been hard to whittle down the list, and if I thought Part 2 was hard, this is even harder, since this is where I now have to leave off so many favorites. Still, if you end up seeing all 10 of the classic films on this Top Ten list, you’ll have schooled AF when it comes to OG damery.

Yes, yet another Barbara Stanwyck movie. (Is it my fault she is the Dame of Dames?) This is an incredible movie for so many reasons, one of which is Barbara’s performance. But Baby Face holds a special place in film history because it is largely responsible for bringing on the infamous Production Code. (There are lots of film fans like me who are passionate about the surprising sauciness of 20s and 30s “pre-code” films.) The film was censored with several suggestive shots and some dialogue where Nietzschean philosophy encourages our heroine to ‘work it, girl’ excised from the release cut. Happily, the cut footage was found and restored to the movie, and in 2005 Baby Face was deemed “culturally, historically, or aesthetically significant” and selected for preservation in the United States Library of Congress National Film Registry. Time.com also deemed it one of the 100 best movies of the last 80 years. (And I deem it a very entertaining prime example of old school OG dame-osity.) 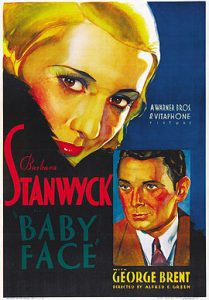 Aside from Mae West bursting on the scene in She Done Him Wrong and I’m No Angel, the sexually explicit messaging of Baby Face was the movie most instrumental in bringing censorship to movies. (In its original release in 1933, it was actually banned in several US cities due to its ‘sexually explicit’ material.) Even today, the movie’s theme – use sex to get ahead and damn the consequences and any hapless souls you leave in your wake – is alternately shocking and comedic.

According to IMDB, Baby Face is the story of “a young woman, sexually exploited all her life, decides to turn the tables and exploit the hapless men at a big city bank – by gleefully sleeping her way to the top.” While there are lots of movies that depict seductresses using men to get ahead, for me, there are several things set Baby Face apart:

* Viewers learn that Barbara’s character, Lily Powers, has been exploited by men since she was 14, with her father basically pimping her out to his illegal bar’s customers. (Remember, this was filmed before Prohibition’s repeal.) Few films ever touch upon the environment, lack of options and motives that might fuel women’s behavior. In fact, explanations of the forces that might shape women’s behavior were considered so incendiary that Lily’s short monologue was cut from the 1933 release version. Her father calls her a tramp and Lily responds:

“Yeah, I’m a tramp, and who’s to blame? My father. A swell start you gave me. Ever since I was fourteen, what’s it been? Nothing but men! Dirty rotten men!”

* Women’s options in 1933 (and 1953, and 1973, and…) were limited. Young Lily’s mentor, the only man who isn’t solely interested in sexually molesting her, is a German cobbler who discusses Nietzsche with her. He urges her not to let life defeat her. When she asks, “What chance has a woman got?” he lays out her only road to defiance:

“More chance than man. A woman, young, beautiful, like you, can get anything she wants in the world. Because you have power over men! But you must use men! Not let them use you. You must be a master! Not a slave. Look, here, Nietzsche says, ‘All life, no matter how we idealize it, is nothing more nor less than exploitation.’ That’s what I’m telling you! Exploit yourself! Go to some big city where you will find opportunities. Use men! Be strong! Defiant! Use men! To get the things you want.”

While historically seductresses are portrayed as greedy vamps, in Baby Face we’re given context that shows how reasonable and Lily’s actions are. Lily’s proactivity can even be seen as laudable; success via men is literally the only Horatio Alger narrative available to her.

* Traditionally, movies where women are less than virginal have them ending up dead or wishing they were. However, in Baby Face the eponymous heroine comes out on top. The movie’s ads declare that she climbed the ladder to success ‘wrong by wrong’ but in the film her exploits are seen as clever — even funny. (At one point, she’s looking to get a job and is asked if she has any experience. With a savvy smirk Lily replies, “Plenty.”) She’s never punished for being sexually savvy. Unfortunately, this will go away for literally decades once the Code comes in.

*Throughout the film, Lily’s best friend is Chico, an African-American woman from her ‘hood. Chico, played by actress Theresa Harris, accompanies Lily from rags to riches, and when one of Lily’s rich boyfriends asks for Lily to fire Chico, Lily puts her foot down. Though the era demanded that Lily keep Chico around in the role of maid, their race-blind loyalty, friendship and comradery is made clear. This is VERY novel for a film on 1933 (and 1943…and 1953…and 1963…) This made a big impression on me when I saw the film as a teen. Most of my friends were black and yet even in the 70s this was an anomaly on-screen.

Trust me, if you haven’t seen Baby Face and/or have an idea that a film almost a century old would be achingly old-fashioned, you owe it to yourself to check out this wonderful pre-code gem.

Lauren Bacall is pretty dame-y, on the screen and in real life. She don’t take none, she can handle herself, she married Humphrey Bogart and she slept with Frank Sinatra. (Well, that last one is a low bar.) She has a great feline look and she slithers admirably in the mid-40s when she was barely in her 20s. I confess she’s not one of my favorite dames (I prefer the apple-cheeked, ebullient variety), but if you’re looking for the sulky, downcast eyes type dame, look no further.

I’d argue that Lauren Bacall’s character in her first film, To Have and Have Not, is dame-ier than her role in The Big Sleep, but the latter is a better movie. Based on Raymond Chandler’s 1939 novel of the same name, The Big Sleep has great dialogue, pornographers, a nymphomaniac, a byzantine plot and a cynical private eye who’s irresistible to women, even savvy dames like our Lauren.

Gold Diggers of 1933 is an early Busby Berkley musical that includes Ginger Rogers singing “We’re In the Money” (in Pig Latin, which she says she introduced to America); pre-code semi-clad girls on and off-stage, and; a cast of some of 30s cinema’s finest dames. The movie features superstars of damery like Joan Blondell, Ginger Rogers, and Aline MacMahon as Trixie Lorraine. (Dame names don’t get much better than Trixie Lorraine, though my old nom de plume, Dixie LaRue, comes close.) Ruby Keeler is also in the movie, and though her characters in these Warner Brother musicals are too naïve to really rank as dames, off-screen Ruby was Mrs. Al Jolson, so she must have had some potent dame-ing going on in RL.

Anyway, this is a fun movie that’s a great time capsule for the Great Depression as well as Dame-ing 101.

Maybe Claudette Colbert in Midnight doesn’t exhibit flamboyant damery, but I’d argue that 1) her character exhibits all the important dame traits, and 2) it’s a great movie and Claudette is always pretty awesome. (Ms. Colbert is a dame of that apple-cheeked, sly wit variety I like so well.)

Midnight is directed with polish by Mitchell Leisen and penned by one of cinema’s all-time best writing duos, Billy Wilder and Charles Brackett. In true dame style, penniless Claudette ends up finagling her way into a glamorous party, then gets hired by John Barrymore to free his wife (Mary Astor) from the grip of a smarmy gigolo. A sarcastic Don Ameche is also along for the ride.

It’s a very entertaining film with some of classic Hollywood’s best behind it, and Claudette’s ingenuity, style and quick-thinking showcase the dame archetype at it best.

Well, that’s my Top 10 Dame Movies list. It wasn’t easy; I was forced to leave off some of cinema’s all-time greatest dames like Jean Harlow, Jean Arthur, Marlene Dietrich, Ann Southern, Paulette Goddard, Irene Dunne, Katharine Hepburn and Myrna Loy. I’ll be doing a runners-up list to get them their due.