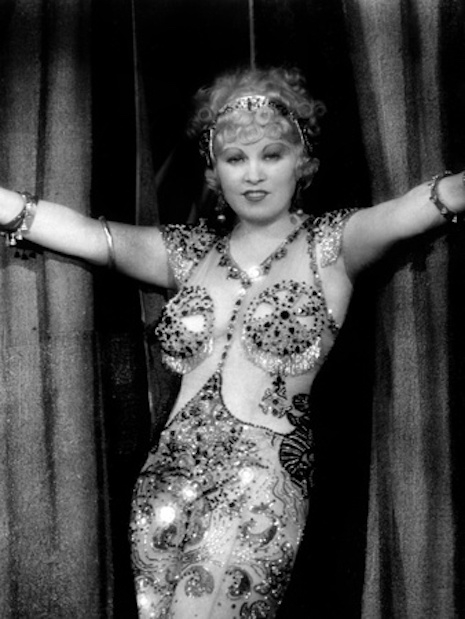 Here is a continuation of my Top Ten List of Classic Dame-y Movies. This is no easy task because there are so many movies that feature dames being dames. It was hard winnowing down the list, so I wrote a separate post explaining my final criteria. (Without a using a criterion here and there, I could not have come up with a Top 30 List, much less a Top 10 list!)

The list could have been 100% Barbara Stanwyck, or included more classic Hollywood lady-like dames like Irene Dunne, Claudette Colbert, Katharine Hepburn and Myrna Loy. But in keeping the list to ten, I knew I had to make sure it included no-brainers like Mae West, and some lesser-known films like Miriam Hopkins’s character in Design for Living and Claudette Colbert in Midnight. The list also includes a couple of dame-erific ensembles like those in Stage Door and Gold Diggers of 1933. There’s Marlene Dietrich (of course) but it’s a Lubitsch movie few have heard of. I also added two films to point out that dames aren’t always relegated to the 20th century; they don’t get dame-ier than Scarlett O’Hara and Cleopatra. (So the list is actually 12 – you get two extras!)

So without further ado…

On stage, in films and in real life, Mae West portrayed the kind of woman “who climbed the ladder of success wrong by wrong.” Mae embodies all that is dame. She is smart, resourceful, independent, witty, a fighter, and when the world didn’t give her a road to travel, she paved her own. 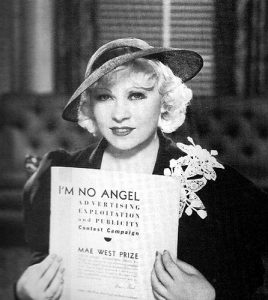 She’d been in various aspects of show biz for decades, and wrote a play called “Sex” that got her sent to jail. (Now there’s a great way to build box office.) She made her way to Hollywood where a bit part in her first film, Night After Night, had her giving out with a line she wrote herself that summed up the identity she’d built for herself. A coat-check girl admires Mae’s jewelry and says, “Goodness, what beautiful diamonds” to which Mae replies, in one of her signature lines, “Goodness had nothing to do with it.”

Her small role made such a hit that she finagled her way into writing a movie to star herself. (Do you have ANY IDEA HOW FUCKING AMAZING THAT WAS IN 1933?!?!?) West put the “sin” in her now-famous insinuating drawl in She Done Him Wrong. (As Mae said, “It isn’t what I do, but how I do it. It isn’t what I say, but how I say it, and how I look when I do it and say it.”) West played a street-smart woman with a heart of gold, mesmerizing to every man who came her way, and full of double entendres and sexy comebacks. She Done Him Wrong was the biggest box-office hit of 1933, and it was followed immediately by I’m No Angel where Mae West perfected her formula.

Once again, Thirties audiences loved her tale of a woman from the wrong side of the tracks making good by being “bad”. In I’m No Angel Mae plays circus performer Tira, whose path to success is built on pursuing the company of wealthy New York men (though it’s the men who do the lion’s share of the pursuing). Once again, Mae West got the sole story and screenplay credit, and once again, tall, dark and handsome Cary Grant (before he was a star) played the one who gets her in the end.

Mae’s damery comes to a boil when she acts as her own attorney in the courtroom, where she wins over the judge, jury, and Cary. The movie also has some of Mae West’s most famous lines, including, “It’s not the men in your life that count, it’s the life in your men” and, “When I’m good I’m very good. But when I’m bad I’m better.” The movie ends with Mae and Cary ready for their honeymoon. “What are you thinking about?” asks Cary, and Mae replies, “The same thing you are.” This ending sums up Mae West’s revolutionary message. She openly desires sex as much as men, and during the New Deal this was a big deal.

It wasn’t easy keeping this list to 10, but there was never any doubt that Ball of Fire would be among the Top Five. (Like I said, I could easily have done this list just using Barbara Stanwyck movies.) 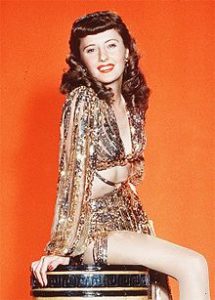 In 2016, the film was deemed “culturally, historically, or aesthetically significant” by the United States Library of Congress. Ball of Fire was nominated for Academy Awards for Best Actress and Best Story (among others). Big whoop. What really makes this movie a classic are its lessons is first-class damery — and cool 1940s slang.

The story, by Billy Wilder, is an adult version of the Snow White fairy tale (recently made popular by the release of Walt Disney‘s animated version, Snow White and the Seven Dwarfs). Sexy singer has to go into hiding with some adoring professors, one of whom ends up being her unexpected Prince Charming. Fellow dames Ginger Rogers and Carole Lombard turned down the role of “Sugarpuss” O’Shea (why?!??!), while Lucille Ball almost won the role until Gary Cooper recommended Stanwyck, with whom he’d recently filmed Frank Capra’s eerily prescient Meet John Doe. (I have to admit, Lucy and Ginger would have been great, too. And maybe Carole.)

Ball of Fire is full of great lines, great characters, and great lines. (One of my favorites: “Sugarpuss” points to her sore throat and complains “Slight rosiness? It’s as red as the Daily Worker and just as sore.”) If you want to see some tactical, healthy dame-ing in action, get thee to Ball of Fire, stat.

Like I’m No Angel, Design For Living was one of the top ten highest-grossing films of 1933. Yet today, most people have never heard of it. It’s a shame, because I LOVE this movie.

Gary Cooper, Fredric March, and Miriam Hopkins play American expats in Paris who enter into a fairly blatant ménage a trois living arrangement. This continental pre-Code comedy was written by Ben Hecht, loosely based on a play by Noël Coward, and directed by Ernst Lubitsch. With that trio behind the wheel, you know you’ll love the journey. While Miriam Hopkins is a little too annoying to be one of my dame faves, her character, Gilda, is too dame-erific to overlook.

The super sophistimicated triumvirate cute-meet on a train, and soon Miriam is unable – or unwilling—to choose between painter Gary Cooper and playwright Fredric March.

In the original Coward play (starring Noel himself, and the Lunts), the three main characters are urbane and cynical. Hecht changed the men’s names and made the trio more, well, American – naïve, exuberant, and buoyantly bohemian.

This movie is filled with great lines (by Hecht, not Coward), and eternally lovable supporting players like Edward Everett Horton. Gilda is sexy, smart, independent and quick on her feet. This is Lubitsch – and dame-ing – at its best.

You kinda have to finish what you started with the remaining four on Part 3 of the Classic Dame-tastic Movies List, don’t you?