The word “fuck “makes me feel good. I love to say it, wear it, think it. I am a fan of all its permutations: fuck, fucking, and fucker. I like fucked — as in with I am not to be. (I love good grammar too.)

I don’t mean I like the word in its sexual connotation (though that’s fine too). I like the word because it makes me feel powerful, playful and independent. I have a sterling silver ring that I never take off. In script it reads “Not To Be Fucked With”. (I let my jewelry end with prepositions; hey, I’m flexible.) It feels good wielding the word like a sword, a shield, sometimes a carefree bauble just tossed before swine. (Sometimes after them, when they’ve left.)

I was always the girl who couldn’t look you in the eye. I went around hunched over, eyes darting about looking for danger, disaster or even distaste. I didn’t want to be hurt. I feared the threat of being disliked, and others’  anger felt as violent as an actual blow. I was afraid  of anyone being mad at me, jealous, irritated or annoyed. I sat with my hands folded, I raised my hand in class just the right amount of times. I made sure I just did well enough. I kept my mouth shut (when I could). It seemed I needed to be good, but not too good. Smart, but not too smart. I needed to be ‘just right’. I wanted to be the porridge Goldilocks chose.

Somewhere around puberty I went from fearing being too much to a certainty of being not enough. I was thirsty for beauty. I knew for sure I was ugly and it seemed good looks were the key to being wanted. I wanted my parents to love me. I neeed my foot to fit the Prince’s shoe.

It pains me to say this went on for several decades. But not as much as those decades of pain. Please don’t be mad at me. Please don’t dislike me. Please don’t hurt me. These pleas were as relevant for total strangers as they were for people I actually knew. My mother’s roll of the eyes stabbed me like a knife. My dad kneecapped me every time he asked why I couldn’t somehow fix my hair.  A co-workers’ sarcastic remark could leave me obsessing for weeks. (Okay, years.)

Then something happened. maybe it was age, maybe it was fatigue. Maybe it was that I just stopped giving a fuck. But gradually I stopped caring about what other people thought. What other people said and did. The years had taught me that there was absolutely nothing you could do to make everyone happy. Some people were just not very nice. Some people just wanted to dislike you, be angry, judge you and ridicule you. It didn’t matter what you did or didn’t do. It was out of your hands. I eventually realized it wasn’t about me at all — it was all about them.

It’s not that I’m particularly angry. Yes, I have a lot to be angry about. I’ve been sexually abused, neglected, betrayed, and every way you can fuck with someone, I’ve been fucked. But I kept it inside. Any pain I felt I smelt into sadness. Not any more. Now if I feel something, I say something. And that thing is usually, “Fuck.”

Because the word fuck, and swear words in general, make me feel better. They are my shields, my sword, power shake. They help me ditch my good girl security blanket and empower me to be the badass I really am. And if you don’t like it — well, fuck you.

You don’t like my criticizing Ivanka Trump? Fuck you. You think I’m too fat?  Go fuck yourself. You want to hang that ugly PTAC unit from the ceiling in my apartment, co-op board? Warning: Do NOT fuck with me.

All those fucks — I feel better already! Try it sometime. 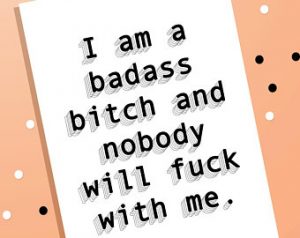