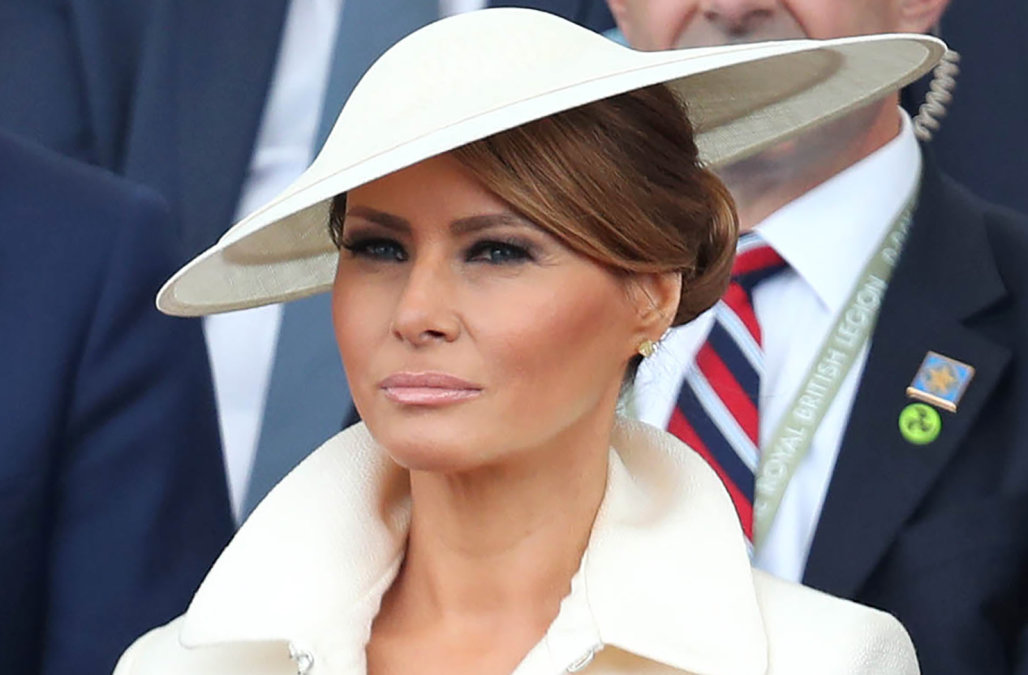 I hate it when people say they feel sorry for Melania Trump.  I hate those “Free Melania” signs.  Melania is not Rapunzel entombed in a tower, nor is she a frightened hostage bullied into submission by an oafish bully.  Even looking at her through the most forgiving feminist lens, she cannot be seen as unwitting Stepford window dressing, robotically smiling through State dinners.

Melania Trump is not a victim.  She’s a reasonably intelligent woman who speaks six languages while her husband can only charitably be said to speak one.  (Sort of.)  After all, she became a US citizen through the EB-1 program, often called the “Einstein” or “Genius” visa.  Though having half a dozen languages under your Versace belt is no small feat, Melania’s virtuosity primarily lies in standing still in clothes (or no clothes), slinky attractiveness, and the willingness to leverage that attractiveness into a lucrative transactional matrimonial bond.  If that bond sours into a luxurious bondage, that hardly makes her a martyr.  Geniuses often get more than they bargained for when they make a devil’s bargain.

But isn’t it hurtful and humiliating, people ask, when Trump’s various infidelities come to light?  Does hearing of his boasts of genital-grabbing and pay-offs to porn stars rankle her feline stoicism?  PUH-lease.  If the general public isn’t surprised by his antics, we can hardly think his plus-one is stunned.  This is no Jekyll and Hyde we’re talking about here; Donald is ALL Hyde, 24/7.  Donald Trump has been famously horrible, and horribly famous, for decades.  When you date, marry, or accept a check from Donald Trump, you know what you’re getting.  Often, nothing.  You’re certainly not getting loyalty, kindness, integrity, or anyone who’ll beat you at Scrabble.  You’re getting a disloyal, deceitful, bullying narcissist.  If you choose to get married you can’t be dumbfounded when you’re harried.  Melania knew full well what she was signing up for.  Like Eva in Green Acres, she just adores a penthouse view, and she got one.  She gave him another wooden heir, whom henamed Barron (I guess “Dukke” and “Desspot” were taken).  She tolerates his hulking, sweaty fumbling frame heaving itself on top of her.  (Does she close her eyesand think of Slovenia?  It’s clear she’s not one to think about America.)  Melania definitely knew what she was getting into when she married “The Donald”.  (Hey, isn’t that what Trump told the widow of Army Sgt. La David Johnson?)

In Michael Wolff’s book Fire & Fury, it’s clear the marriage is one of convenience and that the two have separate bedrooms and seldom communicate.  According to an excerpt from People.com, “‘He and Melania spent relatively little time together. … Often she did not know where he was, or take much notice of that fact,’ Wolff writes, noting that Mrs. Trump also didn’t know about or show much interest in her husband’s business.”  According to Wolff, everyone around Trump found their marriage “perplexing.”  But what’s perplexing about it?  Donald’s ego demanded a trophy with little discernable personality, and her ego, well, adores a penthouse view.  And each was willing to pay the price.  Mystery solved.

Melania Trump is no victim. What do you call it when someone sleeps with someone for money?  Not that there’s anything wrong with that.  It can be a reasonable and rational decision, if you reallyadore a penthouse view, and you really,reallyhave a strong stomach.  My point is: it’s a decision.  That shemade.

I’m not really judging Melania for being thatkind of opportunist.  I’m judging her for being an opportunist who defends her husband’s racism, denies his misogyny, and ignores his infantile cruelty and its consequences.  She even took on her husband’s racist birtherism.  She told Joy Behar that Obama wasn’t born in America: “Do you want to see President Obama’s birth certificate or not?  It’s not a birth certificate.” Her complicity in her husband’s bigotry and bullying is particularly galling when one considers her pretense in being anti-bullying.  She talks about her “Be Best” initiative with absolutely no hint of the screeching, neon irony.  She seems to have chosen cyberbullying as a safe, unassailable advocacy without being prepared to 1) really do much, and 2) see any hypocrisy given her husband’s outlandishly mean bullying on and off-line.  She could practically cut cyberbullying in half if she’d focus on her husband instead of the occasional photo-op.  Also, though Melania’s path to immigration was not exactly above board,she’s fine with her husband’s cruel and arbitrary fight to keep refugees, the undocumented and the un-supermodel-y out.

I am particularly outraged when feminists raise the “Free Melania” flag.  She not only made a choice of her own free will (“EW!”-inducing though that choice might be), and she continuesto make it every day.

In a nauseatingly slobbery 2015 interview in Parenting Magazine (what did I expect, incisive journalism?), Mrs. Trump talked about how she never wanted to change Donald.  (The interviewer gushed about Melania’s enviable relationship wisdom.)  She also shared her personal mantra:

Maybe this speaks to why people pity her. They see a Stepford wife who believes she’s liberated and independent and caring and loads of other horseshit.  But I’m less condescending than that.  I don’t think Melania buys anyof the BS she intones with stoney-seriousness like a Gabor on the Mount.  C’mon Melania.  Areyou really proud of yourself?  Are you your own person?  I have no doubt you take care of yourself from the spa pedicures on your toesie-woesies to the exquisitely subtle streaks in the blowout atop your oh-so-symmetrical face.  But is that reallytaking care of you?  And what about taking care of, or just caring about, anyone not named Trump?

I have sympathy for the mothers whose children and infants are torn from them at the border.  I have sympathy for the women Mrs. Trump’s husband gropes, vilifies and insults.  I have sympathy for the women her husband said he’d punish for their abortions.  But I have ZERO sympathy for Melania.  She is 100% complicit in her situation and her own inauthenticity.  Let’s set aside her plagiarizing Michelle Obama’s  speech, her wearing heartless message jackets and her bilking her adopted country of millions of dollars*.  This sleek un-real housewife is a big fat liar.  Her lies aren’t about infidelities or shopping sprees, though she may have those too.  Her lies are about important stuff, things that affect us all.  When asked about her husband’s presidential campaign in November 2015, she said she encouraged Trump, “because I know what he will do and what he can do for America.  He loves the American people and he wants to help them.”**  That is pure and utter bullshit, and she knows it.  She knew what her husband was all about, and she’s allowed to make that choice.  But to know what her husband is and still try shoving that heinous homunculus atop America’s fragile frame, that’s unforgivable.  Pay the price for your penthouse view, but don’t lie back and close your eyes while you let America get fucked.

Melania, I could respect you and even cheer for you if you’d step up and become the proverbial you-know-what with a heart of gold.  Melania, you traded yourself for a pot of gold, but where’s your heart of gold?

* The Wall Street Journal reported that during just a three-month period in 2017, Melania took Air Force jet flights between New York City, Florida and Washington at a cost of nearly $680,000 to taxpayers.  And btw, Michelle Obama’s solo travel cost an average of only $350,000 a year, with her actually doing FLOTUS shiz, not just toggling between Trump hotels and the White House.

** Her enthusiasm didn’t show itself on the campaign trail;  she played a relatively small role in her husband’s campaign, atypical of candidates’ spouses.

UPDATE: Trump refers to Melania as it. At least twice. On TV:“We have our own Jackie O today, it’s called Melania. Melania. We’ll call it Melania T, Okay?” he said in a phone interview on “Fox & Friends.”