Voting To Not Feel Ugly

I always wanted to be a pretty person, but I wasn’t.  I was an ugly person.  That’s the story I’ve always told myself, and always believed.  My hair wasn’t right, my chest wasn’t super big, my nose wasn’t super small.  I could eat a lot and not get fat, my face wasn’t horribly scarred, but my insecurity made me unable to be grateful for what I did have, I only focused on what I didn’t have.

I don’t know if it was my parents, mass media, or the mirror that shaped this stubborn narrative; I suspect it was all three.  My parents had my hair straightened when I was very little.  As an adolescent I complained about my curly hair, but being adopted, no one else in the family knew what to do with a Jewfro.  One “Divorce Dad Sunday” my father pulled up and on the passenger seat was a magazine with Christie Brinkley on the cover.  “You need to do your hair like this,” he said.  He might as well of told me I had to fly in order to be pretty.  And the world told me that, as a girl, in order to be matter you had to be pretty.  In order to get love, to keep love, you needed to be pretty.

You don’t have to believe it to believe it.  I walked through life in a kind of cognitive slumber.  Compliments, feminism, love – nothing could shake the narrative.  Maybe we all have an allegiance to our identities.  Identity’s grip is tight and strong.  I am a this, I don’t do that.  People like me get this, people like me don’t do that.  As painful as it was, this was who I was.  But this story hurts.  It’s limiting and it’s boring.  No spring chicken, I decided it was time to try and break through this script.

Getting older, this fight to try and be society’s idea of beauty is an increasingly losing battle.  So – choose an different battle, a fight I might win.  I used to be a runner.  I thought of myself as a runner because I ran.  I used to be a bodybuilder.  I identified as a bodybuilder because I lifted heavy weights four times a week.  I felt like those things not because of what anyone thought but because of what I did.  To change who I am and what I believe I have to change what I do.

So now, before I go out on my daily walks, I ask my husband to take a photo of me.  And I post it online.  This may not sound like bravery, but for me it’s a big deal.  Huge.  It was hard and scary.  But each day it gets less scary.  And the sweet people on Facebook who say nice things about the hair I hate, they actually have me re-thinking a half-century of sad certainty.  In the future, maybe I could go to a doctor’s appointment without a blow-out.  Maybe I could meet a friend for dinner without having to shell out for a blow-dry first.  Maybe it’s not disastrous if my husband sees me without lipstick on.

Maybe I’m not so bad after all.

As each day’s selfie adds another ballot to the battle, I hope one day to win the war.  For me, victory will look like not caring about how I look.  Not worrying about looking good will feel good.  That’s the kind of person I want to be. 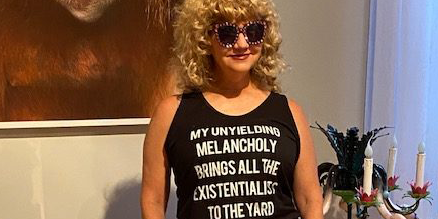