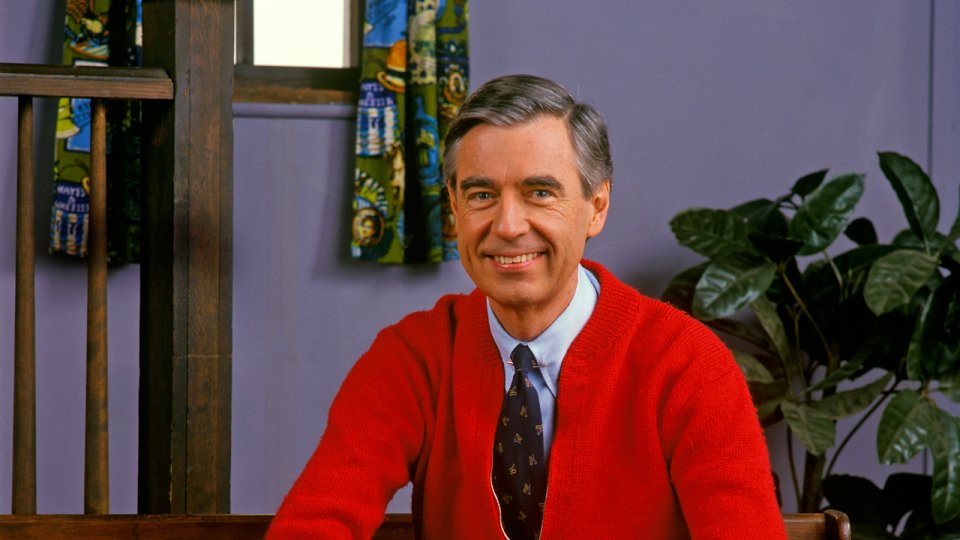 I have unclean thoughts about Mr. Rogers. 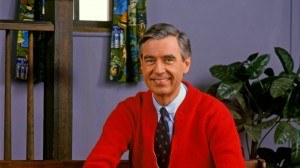 I’m not kidding, or trying to be cute. (Who in their right mind would think wanting to mount Mr. Rogers is “adorable”?)

I’d like to say it started when I was a little girl, but I’d be lying. Sure, I loved Mr. Rogers back then — and I then also loved Roy Rogers, Jesus Christ, my dog Ruben, David Cassidy, and half of the Monkees. But as I got older, and began viewing males as people I wanted to entrance with my budding feminine arsenal, I started to develop a type.  Concerned that my feminine wiles with training wheels would not succeed with men about town, or men about anywhere really, I set my cap on boys who seemed the easiest prey. Besides, as hot to trot as nubile me was, I was also completely terrified of the opposite sex and what they might do to me — slobber-wise, penetration-wise, and judgement-wise. By the time I was thirteen, I’d experienced enough “Show us on this anatomically-correct doll” type stuff  to make even the most seasoned Law & Order: SVU fan shudder, and I’d also watched hundreds of movies and TV shows where fellas done girls wrong, love-wise.

All this, and my own stubborn if not always obvious wholesomeness, made me go for boys (and men) who struck me as sweet, innocent, and non-aggressive (aka the type who wouldn’t strike me). I remember being all hot and heavy for Gary Cooper in Mr. Deeds Goes to Town, Jimmy Stewart in Mr. Smith Goes to Washington, and priests who longed for love but were forced to behave by Jesus. (I’m looking at you, Thornbirds.) Yep, men of the cloth seemed the easiest pickings, in a beggars-can’t-be-choosers sorta way, and I wanted to avoid choosers at all costs. I wasn’t sure what I wanted out of a real relationship, but I was dead certain I wanted to be chosen, and chosen hard. For that to happen, the sampling needed to be small, or not at all, ergo — priests! Insecure as I was, I was sure I could rock a priest’s world, Cosmopolitan Magazine-wise.

Mr. Rogers meets all my sweet, innocent, noble character and ectomorph criteria. Sweet? Check. The cardigans he wears, 200 in total, were all hand-knitted by his mother.

Innocent? Check. According to a Mental Floss story, “He was genuinely curious about others. Mister Rogers was known as one of the toughest interviews because he’d often befriend reporters, asking them tons of questions, taking pictures of them, compiling an album for them at the end of their time together, and calling them after to check in on them and hear about their families. He wasn’t concerned with himself, and genuinely loved hearing the life stories of others. And it wasn’t just with reporters. Once, on a fancy trip up to a PBS exec’s house, he heard the limo driver was going to wait outside for 2 hours, so he insisted the driver come in and join them (which flustered the host).” Also, like me, Mr. Rogers doesn’t smoke, drink, or eat the flesh of any animals.

Here’s where the thought bubble above my head reads, “OMG! We have sooo much in common!” as I practice writing “Mrs. Rogers” 100 times in my best cursive. Like me, Mr. Rogers loved animals, and they loved him right back. I’m sure you remember  Koko, the famous gorilla who could communicate in ASL, and understood thousands of words in English. She was also an avid Mister Rogers’ Neighborhood fan. When Koko got the chance to meet Mr. Rogers in person, she hugged him and then did what she’d seen him do a hundred times on TV: she took off his shoes! (I mean, seriously. I’m on overload, right?)

As for noble character, remember my mentioning Mr. Smith Goes To Washington a few paragraphs back? Well, my man Fred had his own “Mr. Rogers Goes to Washington” moment when his grope-worthy grace pretty much single-handedly secured PBS’ funding. CHECK.

And what else do Jesus, Gary Cooper, James Stewart, Mr. Rogers, my childhood dog Ruben (and incidentally, my wonderful husband) all have in common? They’re all slim as all get out. In that same Mental Floss story we learn that Mr. Rogers “watched his figure to the pound. In covering Rogers’ daily routine (waking up at 5 a.m.; praying for a few hours for all of his friends and family; studying; writing, making calls and reaching out to every fan who took the time to write him; going for a morning swim; getting on a scale; then really starting his day), writer Tom Junod explained that Mr. Rogers weighed in at exactly 143 pounds every day for the last 30 years of his life.”

According to Junod, Rogers came “to see that number as a gift… because, as he says, “the number 143 means ‘I love you.’ It takes one letter to say ‘I’ and four letters to say ‘love’ and three letters to say ‘you.'” That’s why he kept his weight at one-hundred forty-three pounds. I mean, come on. COME ON. Is that the sweetest thing ever? (The answer is, of course,  yes.)

Was poor prepubescent me perverted to have all these lusty-dovey feelings for this genteel and generous man whose aura many described as Christ-like? It’s not like I just wanted to get all freaky between the sheets just for the hell of it. It’s heaven I’m after. After rocking his world, I’d cuddle in close while Mr. Rogers tells me he “loves me just the way I am” as he falls asleep, off to dream about pie and brotherhood and helping sad, lonely children.

If loving Mr. Rogers is wrong, I don’t wanna be right.