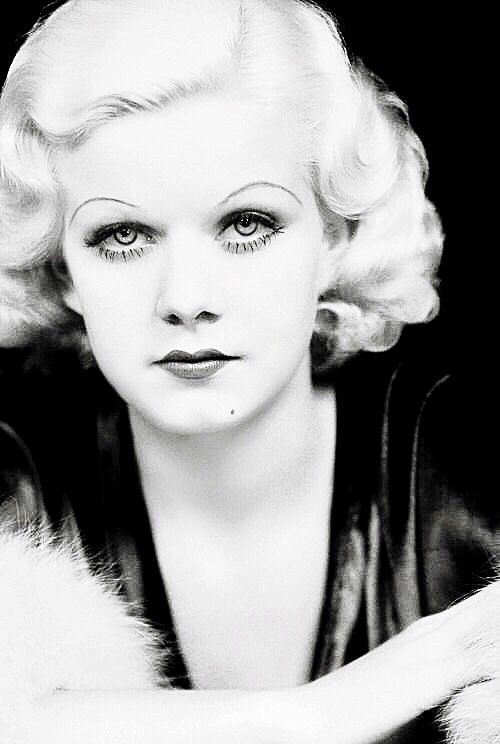 You’ve read the Jean Harlow post– now impress your friends (your easily impressedfriends) with these “Did You Know?” gems:

Jean Harlow and Hedy Lamarr were the primary inspirations for “Batman” creator Bob Kane‘s “Catwoman” character. For Kane, Jean “seemed to personify feminine pulchritude at its most sensuous.”

If you’ve seen Dinner at Eight, you know about the film’s famous last line:

Jean says she’s been reading a book, and Marie Dressler does the double take of all double takes.  Jean’s character tells Marie the book says “machines are going to take the place of every know profession.” Marie looks her over and says, “My dear, that’s something you need never worry about.” Classic movie SHADE!

Well, along those lines, here’s a IRL killer line that came Jean’s way by a clever dowager:

Jean was at a dinner party and continuously addressed Margot Asquith (wife of British prime minister H.H. Asquith) as “Mar-GOT” instead of “Mar-GO”. After a bit, Margot had enough and said to her, “No, Jean, the ‘T’ is silent. Like in ‘Harlow'”. Ooh SNAP!

Everyone on the MGM lot called her “The Baby” with the exception of Clark Gable. A very close friend, he always called her “Sis”.

Jean Harlow lived across the street from canine superstar Rin Tin Tin and his owner Lee Duncan. The old boy was 16 (Rin-Tin-tin, not Mr. Duncan) and as he was dying Jean went over to cradle the dog’s head. The dog died in the Blonde Bombshell’s lap.

Jean’s autograph is considered to be very rare as her mother signed all her fan mail. (I have one of those. (I bought it with my saved-up allowance through the Nostalgia Book Club when I was about 12. I distinctly remember squealing and doing a little dance!)

Harlow hung with lots of mobsters. I guess she was just that down to earth. She dated notorious New Jersey mobster Abner Zwillman, aka “Longy”, who secured a two-picture deal for Jean with Columbia Pictures’ Harry Cohn.  He loaned Cohn $500,000 — in cash – a huge sum in 1930. (That’s like millions – in cash – by todays’ standards.)  Jean was the godmother of Millicent Siegel, the daughter of notorious mobster Benjamin “Bugsy” Siegel.

Its said that, like fellow screen star Carole Lombard, Jean dyed her “cuff to match her collar.” or should I say “muff.’  Hard to believe, only because Jean was a natural blonde and very fair already. It is true about Lombard; George Raft walked in on her while she was dyeing her hair ‘down there’.

Dissatisfied with her scripts, much like her Lola Burns character in 1933’s Bombshell, Jean went on a salary strike from MGM in 1934.  During her break she wrote a novel, Today is Tonight, but the book was not published until 1965. (Louis B. Mayer, head of MGM, made sure the book was blocked.) The novel is a thinly disguised roman àclef about Jean’s relationship with her husband Paul Bern (an executive at MGM). Turns out the bookish, nebbish-y Paul Bern was the love of Jean’s life.

It’s been commonly thought Paul Bern killed himself (due to impotence), thanks to an MGM cover-up and the book Hollywood Babylon. But that’s not true. (He was shot in the back of the head, fer Chrissakes!) It’s likely that Bern’s ex-common-law wife, Dorothy Millette, did the deed. (Dorothy jumped to her death from a ferry days after Paul’s death.) Paul Bern (born Paul Levy) was one of the few who took Harlow seriously as an actress and he was killed a mere two months after his marriage to a heartbroken Jean.

To show you how intrusive and dominant the studios were in stars’ lives, upon finding her husband’s dead body Jean called the studios instead of the police. Executives and “fixers” came in tampered with the crime scene.  To prevent tarnishing Harlow’s image, they put an irrelevant note Paul had written at the crime scene to make it look like a suicide. It was ruled as a suicide.  (Uh, did I mention he was shot IN THE BACK OF THE HEAD?) Paul Bern died while Jean was making Red Dust. She carried on bravely in one of her all-time dame-iest roles. She even bore being filmed naked in a rain barrel.

Harlow had lots of fans among future stars, notably Marilyn Monroe. She was Marilyn’s idol, and Monroe actually backed out of a biopic on Jean’s life. After reading the script, Monroe reportedly told her agent, “I hope they don’t do that to me after I’m gone.”

Coincidentally, both Jean’s and Marilyn’s last movies had Clark Gable as their co-star in their last films. Harlow starred in Saratoga (1937) with Gable, and Monroe starred with Clark (her childhood hero) in her final film, The Misfits (1961).

Jean had two superstitions: She always wore a lucky ankle chain on her left leg.  (It’s sometimes visible if you look closely.)  Harlow had a lucky mirror in her dressing room; she would not leave the room without first looking in it.

Jean owned a massive 152 carat (!) star sapphire round cabochon ring, the biggest one worn by any Hollywood film star. It was given to her by her boyfriend William Powell. Star sapphire rings were very popular in the Art Deco era, and very sought after by glamorous Hollywood stars. (It’s said they were in a friendly competition of sorts for who wore the biggest.) You can see Jean’s massive ring best in one her last films, 1937’s Personal Property.

Jean has been portrayed on the screen several times: 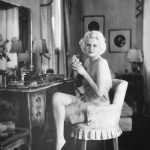 One of the last photos taken of Harlow showed her carrying a copy of the new best-seller, Gone with the Wind. She was determined to read it, but as her illness progressed she couldn’t get past more than the first few pages. When Jean was admitted to the hospital, she reminded one of her nurses to pack it. The nurse, realizing how serious Harlow’s illness was, said tearfully, “She’ll never finish it.” Harlow died later that week.

MGM originally purchased the rights to the Horace McCoy novel, They Shoot Horses, Don’t They? Studio execs planned to cast Jean and Clark Gable in the lead roles. Due to Harlow’s sudden death, the project was put on hold for more than three decades. (When it was finally made in 1969, it received nine Academy Award nominations including Best Director, Best Actress for Jane Fonda, Best Supporting Actress for Susannah York, and Best Adapted Screenplay. The film won the Best Supporting Actor Award for Gig Young. It is the most nominated film in the history of the aforementioned awards without garnering a Best Picture nomination.)

Some quotes from Jean herself:

About Hell’s Angels: “When I was making a personal appearance, I’d always sneak in the back of the house to watch the zeppelin airplane attack. I never failed to get a tremendous thrill out of it. I probably saw that scene hundreds of times.” 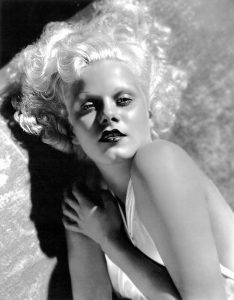 “I was not a born actress. No one knows it better than I. If I had any latent talent, I have had to work hard, listen carefully, do things over and over and then over again in order to bring it out.”

“To me, love has always meant friendship.”

“No one ever expects a great lay to pay all the bills.”

“There is a God, even in Hollywood.” Maybe Jean, maybe.

If you haven’t read the bio post about Jean yet, check it out here.