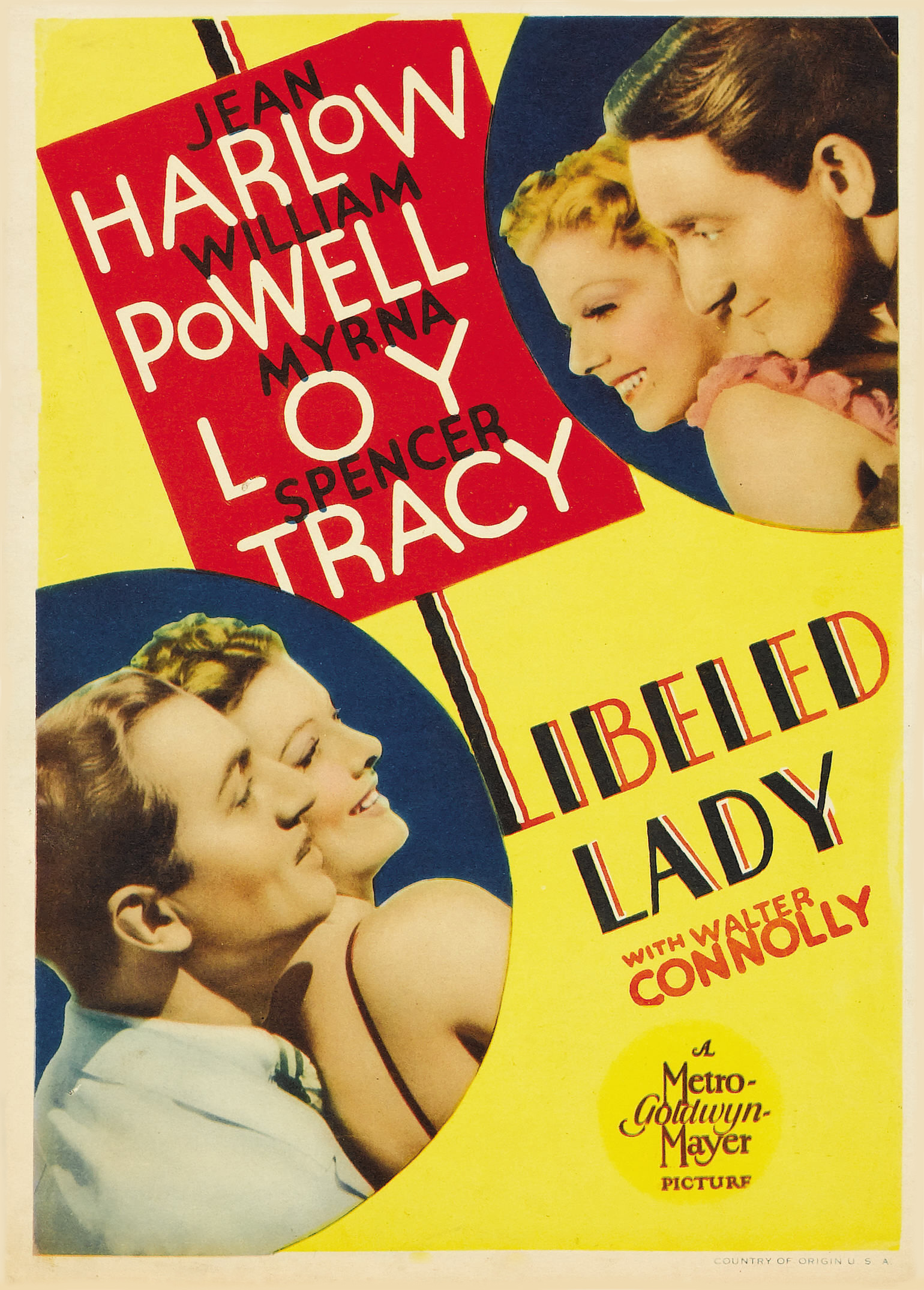 Imagine a movie opening that starred Sandra Bullock, Meryl Streep, Tom Cruise and Tom Hanks, all in their prime. Now imagine Tom Cruise and Sandra were dating and talking marriage. How huge would that movie be?

That might give you some idea of big deal-ness of an all-star movie like 1936’s Libeled Lady.  At the height of the Depression, when movies meant the world to people struggling and suffering, the stars of M-G-M’s Libeled Lady were that world. Jean Harlow, William Powell, Myrna Loy and Spencer Tracy are at the top of their game in this screwball comedy that’s not only packed with major stars but with the major tropes used in 1930s rom-coms: high society, newspaper shenanigans, rapid-fire dialogue, and light-handed slapstick.

I’ve probably seen Libeled Lady a hundred times, and while I enjoy the plot and the comedy, I’m always most bowled over by the quartet’s star power that still packs a punch 75 years later.

How can every woman in the world not want to be Myrna Loy the moment that face appears on the screen and she opens her mouth to say something poised and playful? William Powell manages to combine an urbane cool with boyish buoyancy, while Spencer Tracy is a perfect specimen of the down to earth down-and-dirtiness of the Depression era stop-at-nothing newspaperman.

And Jean Harlow, top-billed because she always remains cute and loveable no matter how brash a broad or dumb a dame she’s playing.  America’s #1 sex symbol in the 30s, her braless breasts have a way of stealing scene after scene. (She was rumored to have applied ice cubes to her nipples before scenes, which I find highly unlikely, though it might help explain her poitrine’s upstaging prowess.  Other breasts may be bigger or nakeder, but Jean’s set somehow mesmerizes this straight girl more than chestier celebs’ more look-at-us boobs.

But all the action isn’t on the screen. Harlow and Powell had recently become a couple in real life, and fan magazines were filled with photos of the pair at Hollywood nightspots. Jean wanted to play the girl who ends up with Powell in the movie, but she was much better suited to the grittier Gladys character. Besides, though Jean and “Bill” may have been real-life lovebirds, America wanted to see Powell teamed with Myna Loy. They were a very popular team, best known  as wealthy and witty murder mystery-solving husband and wife, Nick and Nora Charles in the iconic Thin Man film series.  (If you haven’t seen a Thin Man movie, go get your hands on the second in the series, After the Thin Man, or the third installment, Another Thin Man, though of course the first one is good too.)

Meanwhile, Spencer Tracy and Myrna Loy were rumored to be having an affair off the set, which makes sense since Harlow and Powell were bunking and spending all their time together. Sadly,  Harlow only made a couple more films after Libeled Lady;  poor Jean would die less than a year later at the tender age of 26.

I won’t go into a story summary here, mainly because the plot is hardly the point. The charm of movies like these 30s gems is the way the charismatic stars’ play off one another with bubbly banter — and a window into a world where grown-ups are cool, fun, insouciant, glamorous and childlike (but never childish), and strong and sweet all at once.

How many times have I longed to crawl through that window.  Sigh.