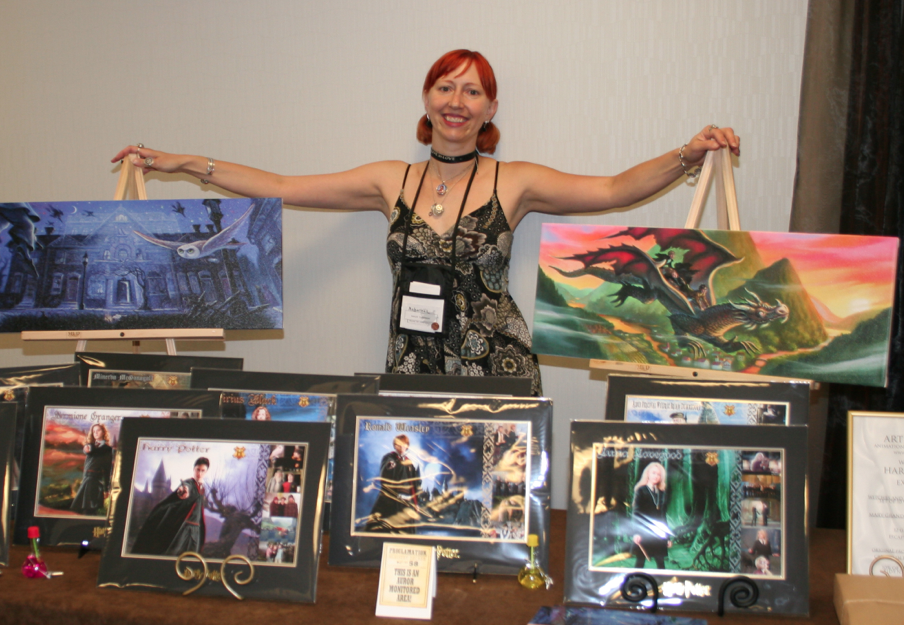 Imagine that you grew up loving movies and art—and the artists who made them; And as an adult you wanted to hang out with all the cool people who made moves and art and loved this stuff as much as you do. Oh, and you wanted to make money and be your own boss while doing it. Your days would be jammed with Jedi—and animation, art, aliens, elves, Batmen and Catwomen. Sounds as impossible and fantastical as one of your favorite movies? Well, Leslie Combemale is living the dream!

For the last 22 years, Leslie has owned and run ArtInsights Animation and Film Art Gallery, selling original art used to create movie posters and animated movies, as well “concept art” created in the making of the movies themselves.   Artists that work with the movie studios sell art through her gallery;  for example, she recently sold the original art used to make the Blade Runner and E.T. movie posters. Hers is the the only gallery that specializes in selling original film art, and she’s known for finding the best and rarest original art from cartoons and movies.

“I basically help people embrace their inner movie geek in every way I possibly can, by helping them find great art that represents their favorite movies (both old and new) and teaching them about film through interviews with directors and artists,” explains Leslie. She also spreads movie gospel by introducing folks to movies via her nationally syndicated film reviews as Cinema Siren. 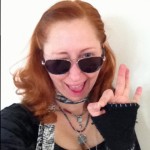 As you can see, they don’t get much dame-ier than Missy Leslie! I recently interviewed Leslie for LikeaBossGirls.com on how she stepped up, leaned in and started her own business, but as we’re both vintage-loving, redheaded classic movie lovers, I had to dig deeper and find out which dames inspired this go-getting “Cinema Siren”:

DIXIE: Leslie, how would you define a “dame”?

LESLIE:  A dame is a woman who knows her own power, or is actively working on embracing it.

DIXIE:  What a great definition! What movie icons or characters are your “dame-iest” role models?

LESLIE:  Claudette Colbert as Bea Pullman in Imitation of Life and as Agnes Keith in Three Came Home. Katharine Hepburn as Bunny Watson in Desk Set. Sigourney Weaver as Ripley in Alien. Eve Arden as Cornelia Jackson in Cover Girl.

And Ida Lupino in real life…she broke tons of barriers..she wrote, produced, and directed.  When something got in her way, she just shifted direction but never stopped moving forward, and never accepted defeat.  I love her!

DIXIE: I love that you got Eve Arden from Cover Girl in there. Because she’s a supporting player she’s too-often overlooked. Of course you, Leslie, are a living, breathing example of damery in action. I also feel like  your business, the ArtInsights Gallery, promotes eternal Dame Nation as well, right?

LESLIE: I try in every way to support and promote women in business.  Certainly when I know of other women forging ahead with integrity in any field, I’ll do all I can from where I am. I have interns that are often young women who are drawn to me for not only my knowledge, but my sense of self, and I take their desire to live my example very seriously.

I also have had many women in my gallery who love getting affirmation that collecting and loving science fiction and horror movies, really any movies that move them, is not only absolutely ok,  It’s great!  Movies have great archetypes that can inspire us, and as of the late 70s (1979 Alien’s Ripley!) we have all the more strong characters to emulate for inspiration from that movie genre.

“To me, promoting damery really comes down to living by example.  I believe as women, we can do anything.  It seems sometimes here in the US we are taught that being self effacing and deprecating is appropriate.  Why not exclaim from the highest peak how awesome and unique we are?  There is nothing wrong and everything to gain from knowing your own power.”

DIXIE: Was it your abiding love of all things film and female that led to your starting ArtInsights Animation and Film Art Gallery?

LESLIE: When I first got out of school, I started working for one of the first galleries in the world that exclusively sold animation art. In order to move on to sell and acquisition the best art, I felt I had to learn all I could. I was voracious. I was and am extremely passionate about movies, and about art that had a purpose—as animation cels and movie campaign art does. I started getting to know artists and animators who have since passed away. I realized I wanted to be the one to decide what art I promoted. I could see that there was no one promoting or selling the kind of art I loved, so wanted to own my own gallery.  I found great artists I could trust, worked to find people inside the movie studios I could trust, and learned absolutely everything I could about Hollywood and film art. Everyone I did business with trusted me, and told me if I started my own gallery they would support it, which they have to this day. As for money, I kind of jumped first, and trusted the net would be there, so to speak. In small business, that doesn’t always work, but with vision, enthusiasm, knowledge, and business savvy, It absolutely can. I’m proof.

Funnily enough, it wasn’t until I was in my early 40s that a lot of people really realized that it was my business! Everyone always thought my husband (who is my partner, but works largely behind the scenes), was my boss. You’d think in the 21st century people wouldn’t still think that way, but they do.

DIXIE: All together now: “Sigh.” What do you know now that you wish you’d known then?


LESLIE:  First, I wish I had been more trusting of my own power. I think it takes many of us as women a long time and many experiences to allow ourselves to celebrate what we know, and trust in what we can achieve.  Second, I’ve always been a bit of a “I’ll sleep when I’m dead” kind of business woman, and I wish I could have learned earlier to ask for help. We don’t have to do it all ourselves!  Lastly, I’d stop giving away so much information to competitors. I’ve always believed there is room for everyone, which is a beautiful way to approach much of life, but in my business, being first and being inventive is essential to success.

For those looking to give a special someone a super special gift, check out Leslie’s Gift Guide and find out how you can be Boss of All Gift-Giving and rock their world while you blow their mind (and socks right off)