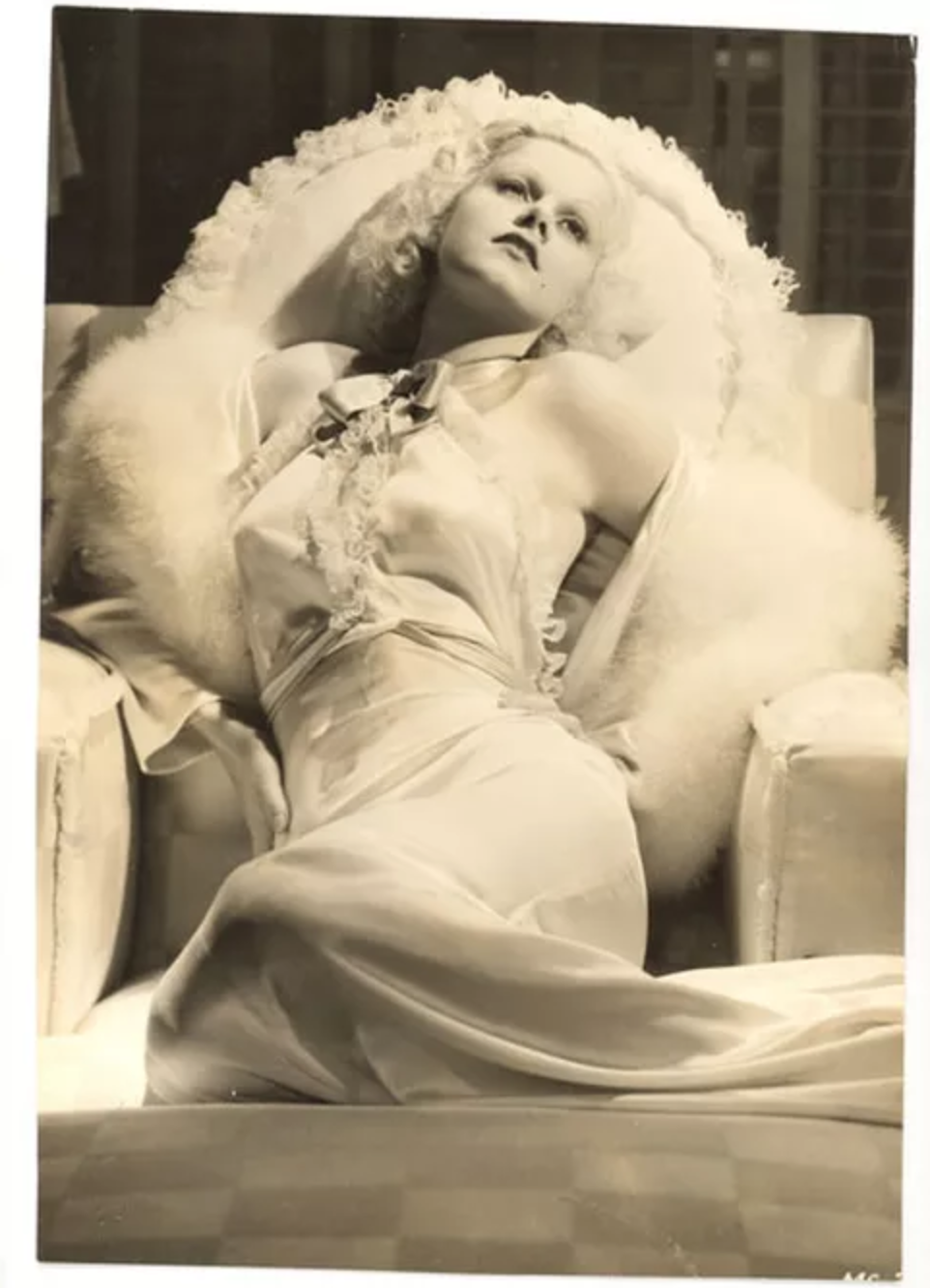 I went to high school in nightgowns.  Not just any nightgowns – fifty-years-old nightgowns. See, the “Love Boat” refugee and “Charlie’s Angels” wannabe looks that were so popular with the rest of the student body left me cold.  They lacked charm, they lacked panache, they lacked bras.

Nope, no blazers and bellbottoms for me.  I was obsessed with old movies and I loved 1930’s lean swank, 40’s tailored chic, and the projectile va-va-va-voom of buxom 50’s styles.  Women like Claudette Colbert and Myrna Loy seemed so much more enchanting and put-together than the celebrities of the day.  I was especially drawn to Jean Harlow and her satiny bias-cut gowns.  Hands on hips, with a defiant tilt of the chin, brazen hair and barely-there eyebrows, Jean embodied guts and glamour.

That’s where the nighties come in.  Everyone wants to emulate their heroes, and 15-year-old me saw no reason why I shouldn’t go about my 15-year-old business in the same kind of clinging, glossy gowns Jean Harlow wore in movies like “Dinner at Eight”.  Hard to come by at the local mall, I scoured Goodwills and thrift stores for the closest things I could find.  Happily, nightgowns from the 1930’s and 40’s were mighty close, and easily purchased with money made from babysitting and working at Burger King.  So I plucked my eyebrows to within an inch of their lives, and each morning I’d put on a pair of open-toe Candies (or my beat-up cowboy boots on days where I’d be on my feet quite a bit), and I’d stride down to the school bus stop.

Here’s where it gets tricky.  Have you ever had a bunch of kids in white jeans and overalls drawling, “We’re goingta keeeel yew” as they pelted you with whatever rocks or clumps of grass were handy?  It hurts in more ways than one.  (And it don’t do your nice white nightgown any good neither.)  Then you get to school and you’re pummeled with snickers and nasty misspelled notes slid into your notebook between classes.  This sort of thing went on for quite awhile.

And here’s where you’re probably wondering why anyone would continue to wear slimy ole vintage nightgowns when the public response was so overwhelmingly negative?

This is the thing:  Feedback is a good thing.  If you have a particular goal in mind, it tells you how far or how close that goal may be, and what you may need to do to get you there.  Feedback is really good at telling you how you’re doing and where you are.  But it can’t tell you who you are.

I knew I was dressed differently than everyone else; I wasn’t blind, or stupid.  And I hated being teased and assaulted; I wasn’t particularly brave or rebellious.  But I loved those movies, and Jean Harlow, and those nightgowns, so much . I identified with them, engaged with them, and felt at home with them.  They were who I was, more than those Wayfarer-wearing wastrels would ever be.

Whenever I wore a vintage frock or ropes of rhinestone bracelets around my wrist, or anything vaguely smacking of “My Man Godfrey”, the jeers were inevitable.  But I never stopped being baffled by those nincompoops’ response.  Couldn’t they see how cool these clothes were?  Wasn’t this a fun change of pace from the boring uniformity, a nice break in a sea of polos and tight nylon Nik-Nik shirts?

My feelings would get bruised, and sometimes the rest of me as well, but I kept wearing my vintage get-ups and continued daydreaming I was Alice Faye or Priscilla Lane and that a sharp-tongued but sheepish John Garfield would come along any day now and we’d go wisecracking into the sunset together.  And while most people I tell this to think I was dumb and stubborn, I think they’re missing the morale of the story.

You shouldn’t make fun of anyone, and you certainly shouldn’t throw rocks and dirt.  People do that out of fear – fear of what’s different, unknown, or new.  But when you’re true to yourself, when you’re not afraid of who you are, that’s the opposite of fear.  When you know who you are and embrace it, there’s no room for fear.  There’s only room for love – love of old black and white movies, snappy heroines…and maybe even a little left over for yourself.