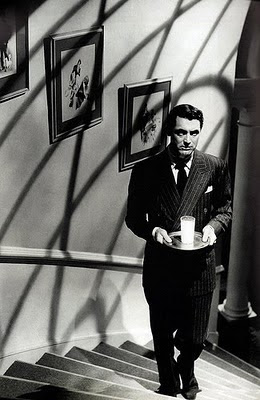 Take my advice, make sure your husband doesn’t murder you. I’m not saying this because when a wife is killed the husband is usually the first suspect they suspect. I may be saying this because I watched, roughly, 2 million hours of Law & Order. But I’m probably saying it because I’ve been watching old movies – “classic movies” – all my life, and it’s clear that getting married can be awfully dangerous.  Here are some of the badder better halves at least trying to shuffle their mates off their mortal coils in a few black and white uxoricide-tastic classics. Please do add the ones I forgot!

(Obviously, there are built-in spoiler alerts in this topic; you’ve been warned.)

Is this charming ne’er-do-well trying to kill his mousy missus for money? Did he do in his baffled bestie? And what’s the deal with that glowing milk? It’s super obvious that the answer is yes, yes, and Hitchcock movie-making magic. But, the studio just couldn’t bear to have Cary be a bad guy so they tacked on an ending that feels very, well, tacked on. Still, it’s directed by Alfred Hitchcock, it’s got Cary Grant who is always wonderful, and Joan Fontaine won an Academy Award for her performance. (Though IMHO it’s probably really for the previous year’s Rebecca.)

One of my all-time favorite movies and it is hands-down my favorite Hitchcock movie. (It was also Francois Truffaut’s favorite of Hitchcock’s black-and-white pics.)  For me it’s certainly the sexiest, easily beating out North by Northwest. (There is a long kissing scene between Cary Grant and Ingrid Bergman that knocked my adolescent socks off, and possibly some undergarments as well.) The Macguffin (smuggling uranium) is completely obscured by all the sexiness and suspense, but apparently it was still enough to scare US officials. (The FBI had Hitchcock under surveillance for 3 months. He made this movie before the US dropped the atom bomb, so using uranium as a plot device was très tricky.) Anyway, Claude Rains is fantastic and you actually feel sorry for the poor mama’s boy Nazi. (Ah, the chilling way he delivers the line, with that world-class side-eye, “Drink your coffee…it’s getting cold”. Genius.)

Charles may not be technically trying to kill his wife, but for many women he would top this list as worst bad husband ever. Working to convince Ingrid Bergman she’s going crazy is really mean, and creepy, and it’s this movie that gave us the term “gaslighting” when people try to pull that dirty trick today.

Vincent Price is mostly known for owning the 50s and 60s horror genre, but his portrayal of the possessive, perfectionist patriarch feels way more sinister to me. How Gene Tierney ignores all the red (I’m talking briiiight red) flags is perhaps the most mysterious of mysteries in this dark, Gothic thriller. Anyway, Vincent leaps from badness to madness and his final crescendo into crazy is impressive. The movie was based on the best-seller by Anya Seton and (fun fact) it was the directorial debut of famed writer and producer Joseph Mankiewicz.

When you think of film noir, the names Don Ameche and Claudette Colbert do not spring to mind.  Neither does Douglas Sirk. Yet they’re all part of this slick tale that starts with Claudette waking up screaming on a train because she has no idea how she got there. (C’mon, Claudette, we’ve all been there.) Anyway, Don is a little too into Claudette’s money and way too into slinky bad girl Hazel Scott.  I’d give Don my vote as one of the worst husbands on this list. Gaslighting, adultery, attempted murder, being a total smarmy dick – he checks all the boxes. (Fun fact: The producers were Mary Pickford and her husband Charles “Buddy” Rogers.)

OK, he wasn’t successful, but he tried to kill his wife (Grace Kelly). Just because he’s a tennis-playing cad who wants his rich wife’s money and is peeved that she has a boyfriend (the always underwhelming Robert Cummings). Another Hitchcock film, it feels more like a Columbo or an Alfred Hitchcock Presents than a movie. It certainly didn’t need to be in color, much less 3-D. Speaking of Hitchcock and tennis players, I guess I could put Strangers on a Train in here, but the tennis pro husband Farley Granger didn’t want to kill his wife, even though Robert Walker did it for him anyway.

The classic French thriller. It shocked audiences at the time. I can’t tell you more or I’ll totally ruin it for you. I may have already.

Released in 1947, but made 2 years earlier. Like other movies on this list, it has an unfaithful husband, poison, and a husband way too eager to give his wife milk every night.  (Ladies, if your husband lovingly insists on giving you some beverage every night before bed, you might want to check his Google history. Just saying.)

She was the target in The Two Mrs. Carrolls and once again someone is after poor Barbara Stanwyck.  As always, Barbara is superb, but I still prefer the classic episode of the radio series, Suspense, upon which this film is based. Barbara is good, but Agnes Moorehead was even better.