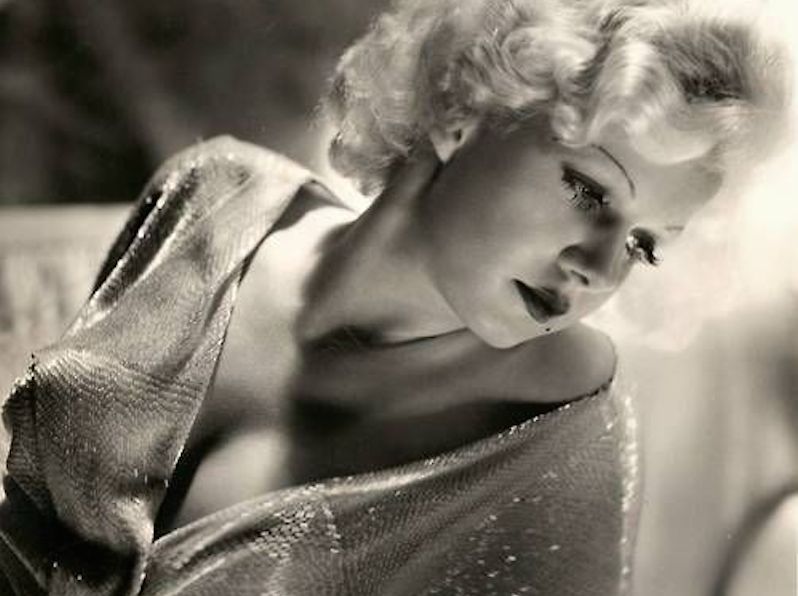 Sexy blondes from Marilyn to Madonna owe 1930s movie superstar Jean Harlow a huge debt. (As does Clairol.)  It may be hard for contemporary minds to understand, but blonde has been the sexy shade for a relatively short time. Before Jean Harlow — aka the “Blonde Bombshell” — came on the scene, blondes in popular culture were the innocent, virginal type. They were the maidens who needed rescuing, the simpering sylphs the Snidely Whiplashes of this world tied to the train tracks, or threatened with a “fate worse than death”.  (Though frankly, getting run over by a train seems #1 on the horrible fate scale.) Blondes were the girls back home hoping their men weren’t tempted away by big city vixens. And invariably, those vixens were brunettes.

Take silent movies. The innocent good girls were often fair-haired, like Mary Pickford, Janet Gaynor, the Gish sisters, and poor Mary Miles Minter.  The big-time (and often deadly) vamps and tramps were sultry brunettes like Theda Bara, Pola Negri, Barbara LaMarr, and Nita Naldi. Heroines, even sexy protagonists, could be both blonde or brunette (Gloria Swanson, Greta Garbo and red-headed “It Girl” Clara Bow, for example) but generally it was brunettes who were considered exotic and worldly enough to know how to entice nice young men. Some gentleman may have “preferred blondes”, but those blonde baby-talkers came across as innocents on the outside, no matter how scheming and gold-digging their intentions. That was before Jean Harlow came along. 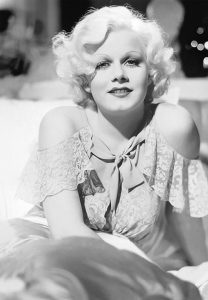 Born Harlean Carpenter (Jean Harlow was her dominating mother’s name), it was Jean’s sensational figure and striking platinum blonde looks that first caught audience’s attention. (Though she likely helped that platinum along, Jean is one of the very few blonde sex symbols who was an actual blonde.) She had a few very small roles in ‘shorts’ with wonderful names like Bacon Grabbers, Thundering Toupees, Double Whoopee and her first, which asked the eternal question, Why is a Plumber?

Then, as many a Hollywood anecdote begins, along came Howard Hughes. He was making a big-scale World War I aerial epic, Hell’s Angels, and he cast his ‘discovery’, Jean, in her first feature film in the role of a vamp who infamously suggests she “slip into something more comfortable”.  The blockbuster had an eight-minute two-color Technicolor sequence — a huge deal in 1930 -– and it’s the only color footage of Harlow in existence. Harlow was on her way. (Dating notorious New Jersey mobster Abner Zwillman, aka “Longy”, was also a big help; “Longy” secured a two-picture deal for her with Columbia Pictures’ Harry Cohn  by loaning Cohn $500,000 — in cash.)

The very, very blonde vamp also seduces the lead, James Cagney, in his star-making role in the seminal gangster flick, The Public Enemy. Harlow’s part is small but she still manages to star with Cagney in most of the film’s posters. Her impact was clear when she played the title role in Frank Capra’s Platinum Blonde, a film named after her publicity sobriquet. Though she had the requisite hue, she’s terribly miscast as a high society beauty, especially when she talks about going to the “liberry”. (No judgement; I used to say it that way too.) My favorite of her early films is 1932’s unlikely titled Red-Headed Woman. With a script by Anita “Gentlemen Prefer Blondes” Loos, Harlow’s character climbs to the top from man to man, leaving various angry losers in her wake. (Much like a less clever, less bitter Barbara Stanwyck in that same year’s Baby Face.) For those of you unfamiliar with pre-code films of the early 1930s, you may be surprised at how sensual brassy Harlow is in her early movies. As famous critic Graham Greene put it, “Her technique was the gangster’s technique – she toted a breast like a man totes a gun.”

Harlow played another gangster’s moll throwing her breasts around in 1932’s gritty Beast of the City, but went on to spectacular success in the second of her six films with Clark Gable, Red Dust.  This is the movie that took her out of the old man-eater category and cemented her screen persona as a “bad girl” with a heart of gold. But pre-code heroines like Harlow and Stanwyck ushered in a new kind of “bad girl” who wasn’t really bad at all. They’d just been, you know, around. Life has kicked them around, and they did what they needed to in order to survive, but they always manage to keep their empathy and humanity. This good bad girl trope is made clear in Red Dust when Harlow’s character ends up being much more of a solid character than the ‘lady’ Clark falls for. Mary Astor is an unfaithful wife, but we soon see that Harlow is much more virtuous and authentic – and therefore classier – than Astor’s uppity upper-cruster.

1933 saw Harlow as the good bad-girl again in Hold Your Man with Clark Gable, but she’s best known for that year’s all-star Dinner at Eight. While audiences have seen glimpses of her comedic ability in earlier films, it’s in her role as the spoiled Kitty who gives as good as gets from Wallace Beery that she really shines. But if you don’t want to sit through all the other dull storylines waiting for Harlow’s wisecracks, I’d recommend 1933’s Bombshell instead.  This movie about a Hollywood sex symbol with manipulative family members and scheming servants bears a big resemblance to Jean Harlow’s life, and that of Clara “It Girl” Bow. It has the marvelously fast-talking Lee Tracy (I ADORE him) and shows us a lot of behind-the-scenes Hollywood realities. It also sports some of Harlow’s best snappy monologues, one of which always gets applause whenever I’ve seen the film in revival houses.

Jean wasn’t always the best judge of what made for a good movie. She reportedly turned down the leads in both King Kong and Freaks . Still, even if her resume doesn’t have many Hollywood classics, her CV is full of gems. Probably Harlow’s most entertaining movie is the 1936 comedy, Libeled Lady. Harlow’s great in it as a long-suffering girlfriend of a newspaper editor, but the film also has a great script and, oh yes, it also stars Spencer Tracy, Myrna Loy, and William Powell (who was Harlow’s real-life boyfriend at the time). Harlow’s also in the all-star Wife vs. Secretary with Myrna and Clark Gable. (Guess which one Jean is?) That movie is most famous to me as one in which her character gives James Stewart’s character a kiss, and it knocked Jimmy’s socks off! (Apparently, he’d never had a woman ‘snake it in’ before.) 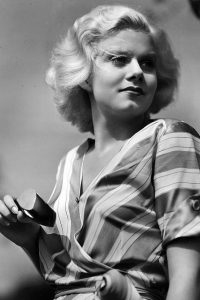 Harlow made lots of films in the 10 years she was in movies (36 to be exact), but her career and her life ended tragically too soon. In 1937, when kidney transplants and dialysis were many years away, poor Jean died at the tender age of 26 (!) from uremic poisoning brought on by acute nephritis. Harlow is interred at Glendale’s Forest Lawn Cemetery in a private crypt purchased by William Powell for $25,000.

Jean Harlow’s life and career burned brightly and briefly, but she has had a lasting impact. Though gone now for over 70 years, Jean remains a Hollywood legend who continues to affect film history, fashion and those looking for sassy and brassy role models. Harlow’s dame credentials are solid, on and off the screen. She is one of the originators – along with sui generis dames like Stanwyck, Joan Blondell, Ann Sothern – of the gum-chewing, street-wise glamour puss who can give as good as she gets. In true dame fashion, she’s resourceful, independent-minded, good-hearted, sharp-tongued, smart, loyal and, yes, loaded with sex appeal.

In May 1937 she was the very first motion picture actress to grace the cover of LIFE magazine. In June 1999 she was ranked #22 on the American Film Institute’s “100 Years, 100 Legends” list.  Jean Harlow died very young, she was only in a handful of good films, but her damery was such that she has left an indelible mark on film history, pop culture, and the hearts and minds of 20thcentury – and 21stcentury– fans. She is a Patron Saint of Damehood and we’d all do well to emulate her guts, glamour and good-nature.

NOW, for some cool little-known facts about Jean Harlow, check this out!