I didn’t think I’d ever be married, and I doubt anyone else did either.

First, I am what people generously term,  “a character.”  (I don’t think I am, but maybe that’s the point.) Also, when you’re pushing fifty, live with 2 dogs and 4 parrots, your chances at finding Mr. Right,  Mr. Asperger’s, or Mr. Anyone are, to put it kindly, slim.

I’d been with my first boyfriend on and off for over 20 years, but we never married. Everyone assumed we ‘d be together until one of us died (either by our own hand or done in by the other one of us).  We broke up and I threw myself headlong into a love affair that I thought was all about love but turned out to be more the affair part. Well, it left me broken-hearted. A lot.

After a month of being deeply depressed, all rocking back and forth fetal position-y, I decided I needed to pull myself together. Stat.  I began reading anything I could find that might help: philosophy, theology, metaphysics, new age books, self-help books, bumper stickers, “US Weekly’s Worst Beach Bodies” issue, anything to help me feel better, to help me feel some hope.

All the books said essentially the same two things: 1) Surrender, and 2) Get off your butt. In other words, have faith, and manifest that faith by acting like you really expected things to turn out OK.

One Saturday night, about 2 in the morning, I found I’d had it. I said out loud to God, or whomever or whatever might hear me, “I am done. Done trying to make this happen, to make anyone do or feel this or that.  These books say if a thing’s meant to be it will be, and if it’s not then nothing I do can change that. So I’m giving up the reins, letting go of the wheel, leaving it all up to you. If YOU want me to find true love, great. If you don’t, well, that’s OK too. If you want me to rescue dogs out in the desert, I’ll do that. I’m leaving it up to you. In other words, I surrender.”  And then I felt…better. Lighter, hopeful-er. I fell soundly asleep for the first time in weeks. 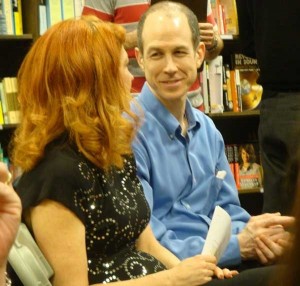 The next morning – Sunday, January 14th — I awoke deciding to act on my newfound faith. To act like someone who still hoped. I remembered one of my books quoting Jesus (or maybe Dolly Parton, I’m not sure) saying, “If you want it to rain, dig ditches.” So, how should I manifest my faith that romance and love were still possible — that someone, sometime, would actually see this old broad in her undies?

Well, what better way than to buy yet even more expensive lingerie, (though, after aforementioned affair, I’d already acquired a lifetime’s supply). I decided to go downtown to Agent Provocateur, a very expensive shop where I’d already spent unconscionable amounts of cash.  This was the last thing I needed, but what better way to show the ole Divine Intelligence that I truly believed? (I’m sure this is what Jesus had in mind when he spoke of that whole dig ditches thing. )

Committing to faith and the sustaining hope it offered in return, I got out of bed, threw on a parka over what I fear may have been pajamas, and walked to the subway.  It was very early and I knew the store wouldn’t be open for a couple of hours, but I thought I’d just sit on the stoop and wait. (I was that determined to dig some ditches with some new lacy britches!)

When I boarded the subway the car was nearly empty, it being so early on a Sunday.  I saw a slim man leaning against the pole, reading a thick book.  I thought, “Why in the world would you stand when you could sit?” (For that matter, why sit when you can recline, though on public transport I find it best to stay upright.)  I saw the book he was reading was called “The History of Philosophy- Volume 9.” A philosophy-reading comrade! I wanted to give him a little heads up about the bond we shared, maybe a nod to convey, “I may look like a homeless drunkard, but I too am of your vanishing ilk!” I leaned over and asked who wrote the book he was reading, expecting he would say the author’s name and return to reading, buoyed by the existence of a like-minded soul.  To my surprise he pivoted and knelt to be at eye level, and we began talking about philosophy. At one point he started the first verse of Monty Python’s “Philosophers Song” and seemed unfazed when I chanted along through to the end.

I am not the pick-up-a-man-on-the-subway type. (Honest.)  But there was just something about this man. Have you ever met anyone where it was immediately apparent that the person was just completely devoid of even an atom of sinister?  He didn’t have even the slightest  iota of icky and just radiated intelligence and wholesomeness, and was just so up my Mr. Rogers-loving alley.  I thought about staying aboard the train but that seemed pretty Mentos commercial cheesy. Besides, he might be married, gay, a sociopath, or  all three. I’m just too, well, something, to be able to give him my number or ask for his. But just as my stop came up, I rose, said it was nice meeting him, and as I exited the train I breathlessly blurted, ”If you have any philosophy book recommendations…” and called out my email address just as the doors were closing.

Checked my email that night – nothing. The next morning, nothing. I didn’t know why this chance meeting had affected me so, but I woke up mad at myself and stayed mad all day. I should have stayed on the train!  But later that afternoon I gave it another try and there it was –a long email from the Mr. Nice Guy guy, recommending various philosophy tomes.  He’d Googled me so I had no chance to obfuscate my nuttiness. I Googled him but turned up nada.  Was he a serial rapist, or maybe a gentleman safecracker? I decided to assume he was the latter, and told him so in my response. (That is why, to this day, I call him “Raffles”.)

We emailed back and forth for about a month.  He wrote long, erudite letters, which I of course scanned for any faint glint or inference of romance. Maybe he only saw me as an unkempt bookish nut who rides the subway in jammies. To underscore our gender difference, in my emails I periodically wove in details I hoped would highlight my throbbing opposite sexdom, things like, “Gotta go, off to my pole-dancing class” or “Can’t wait to take a long bubble bath later.”   It must’ve worked, because exactly a month to the day after we met — poor Raffles was oblivious to the fact it happened to be February 14th, Valentine’s Day —  my subway swain finally emailed me to invite me out for pancakes.  I was shy and scared and thought about canceling our date a hundred times. But on Sunday, February 25th, about six weeks after we met, we went on our first date, breakfast at the Clinton Street Baking Company (famous for their pancakes). Two years later we got married. 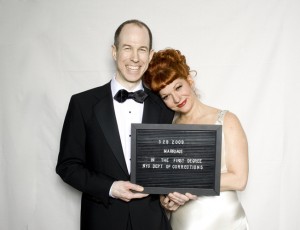 Turns out my gentleman safecracker is one of the sweetest, smartest, wonderful-est men on Earth, and somehow or another I’d clouded his mind sufficiently that he was willing to spend the remainder of his life with me (and 2 dogs and 4 parrots). On our wedding day, Raffles’ gift to me was a framed piece of notebook paper, upon which was scrawled that email address I’d shared that fateful winter day.

Was it Divine Intelligence really coming through for me, serendipity, or something else that brought this middle-aged spinster and bachelor together? All I know is that one night I let go and surrendered to faith — faith in love, faith in miracles – and, against all odds, I ended up with both.

(By the way, Volume 9 was the last in the series, and Raffles was on the second to last page of that philosophy book. Had I seen him just a minute later we’d never have met.)