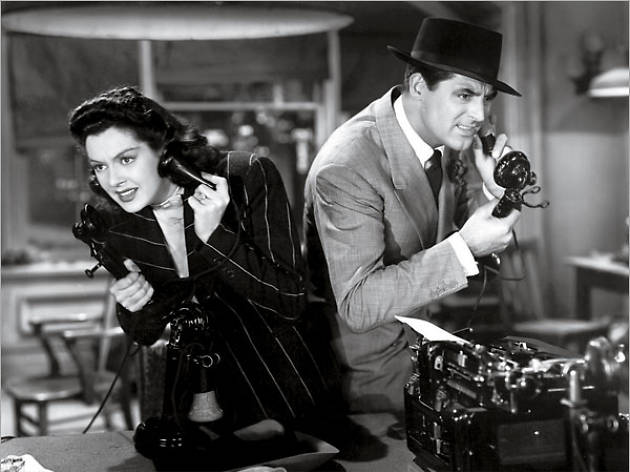 I’m often asked, “What is the ultimate dame movie?” (Ok, I’m the primary one asking myself that, but trust me, I ask myself a lot.)  It’s too hard to come up with just one film, but I can say that a prime example of classic movie damery is definitely Howard Hawks’ His Girl Friday.

Starring Cary Grant and Rosalind Russell, His Girl Fridayis a remake of The Front Page,routinely thought of as the “best newspaper comedy of all time”. It’s about a newspaper editor who’ll stop at nothing to keep his star reporter, Hildy Johnson, in tow.  The brilliant change here is that while the editor, Walter Burns, still plays all kinds of tricks to keep his reporter from leaving the paper, this time Hildy happens to also be his ex-wife. If you can let slide the insanely improbable idea that any woman would trade in Cary Grant for Ralph Bellamy (I mean, come ON), this is pretty muchtheperfect film, a movie I often use to try to hook haters into the classic movie fold.

“One of the fastest, funniest, and most quotable films ever made”, His Girl Friday is a speedy and hysterically funny movie. It’s got that street-wise, rapid-fire dialogue I love in 1930s and 40s newspaper and crime pictures. But it also has timeless wit, evergreen political cynicism, and the never-gets-old romantic screwball-ery of a couple who can’t be together but reallycan’t be apart. Though His Girl Fridayis a prime example of damedom, and Rosalind Russell plays the “girl”, the “his” in the movie is whom I consider to be the greatest movie star of all time, Cary Grant. (Cary is the best. He is genius at comedy, great at drama, and watchable and wonderful in every single thing he’s ever done. Plus, well, he looks like Cary Grant.) In addition to Cary and Roz, the movie has a passel of superb supporting players, those character actors that don’t get the glory of movie stardom but are as responsible as the leads for classic movies’ enchantment. His Girl Friday sports John Qualen, Roscoe Karns, Cliff “Ukulele Ike” Edwards, Gene Lockhart, and – unsung but one of my faves, Abner Biberman. Billy Gilbert’s turn is especially fantastic; I always get the feeling he and Cary are genuinely amusing each other.

Back to the leads: Cary is sharp and scoundrel-y Walter Burns, but as the star reporter who thinks she’ll be happily married to insurance salesman Ralph Bellamy (“Ah, a home in Albany, with mother too”), Rosalind gives as good as she gets. She’s an ace reporter, and she is intelligent, funny, street-smart, kind, resilient and resourceful. When Walter tries to pull a fast one, she pulls one right back. She can snap out a good line just like her male newspaper room comrades. (I love it when she refers to the very platinum blonde, Marion Martin, as an ‘albino’.)  Like a good dame, Hildy not only sees through shenanigans, she anticipates them. She’s tougher and savvier than her fiancé, so it’s no surprise, nor need we be sorry, when she kicks him to the curb. (No spoiler alert needed – if you’re watching the movie and you actually think Rosalind and Ralph are going to ride off into the Albany sunset together, you’re not very bright, and clearly unworthy of this divine dame fare. Tell whoever’s reading this to you to stop right here.)

If you are already acquainted with the movie, here are some little meta nuggets to look for next time you watch. At one point, Walter says , “Listen, the last man that said that to me was Archie Leach, just a week before he cut his throat.”  Well, Archie Leach is Cary Grant’s real name. In one scene, Walter is describing Hildy’s fiancé and says, he looks “like that fellow in the movies, Ralph Bellamy.” Outside of the Hope and Crosby pictures, it’s unusual for classic movies to get meta like this.