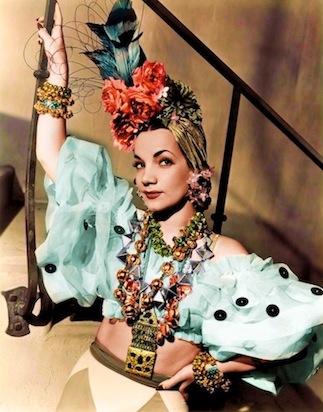 If Carmen Miranda didn’t exist we’d have had to invent her. It’s almost impossible for me to imagine a world without a woman in impossibly high heels and an impossibly high tower of fruit on her head chic-chic-a-booming to an infectious samba. (And neither can most drag queens.)

Many people today recognize the image of the “Lady in the Tutti-Frutti Hat” as she still pops up in pop culture in everything from banana commercials, Woody Allen movies, to Bugs Bunny and Daffy cartoons. Some people may even know her from the spate of movies she made for Twentieth-Century-Fox during the 40s. But few are aware of what a huge star she was at the height of her career, or how a poor pint-size Portuguese practically willed herself to stardom.

Born Maria do Carmo Miranda da Cunha (try saying that 5 times fast) in Portugal on February 9, 1909,  her family emigrated to Brazil when she was a young child. Her father christened her Carmen after the Bizet opera, and his love of music may have had something to do with little Carmen’s love of singing and dancing at an early age. Her convent education failed to put a damper on Carmen’s show biz aspirations, neither did dad’s intense mucho macho disapproval. (He beat her mother when he learned she’d supported Carmen’s audition for a local radio show.) Carmen’s sister contracted tuberculosis and at 14 Carmen went to work in a tie shop to help pay sis’s medical bills. She then moved on to a boutique where she learned to make hats, eventually opening up her own hat business. (This explains a lot. Try initiating a conversation about Carmen Miranda without mentioning the word “hat”; you can’t.)

Carmen was very drawn to the native samba music of Brazil, and her performing was so successful she became the country’s first radio contract singer in 1933. Her “South American Ways” led to Lee Shubert, as in Shubert Brothers, signing her to a contract which led to her stage debut in 1939, where she played opposite Abbot & Costello in “The Streets of Paris”. (How do those 3 things go together?) 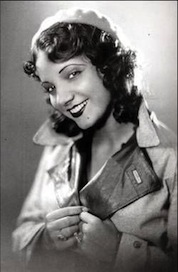 Her part was small (she spoke four words) but nonetheless our chica became a huge sensation. She was formally presented to President Roosevelt at a White House banquet and drafted into the government’s wartime-inspired Good Neighbor policy. The thinking was that if Americans were exposed to Carmen and her awesome Carmen-ness, the American public would be more kindly disposed toward South America, i.e., our Allies. In 1940, 20th Century Fox signed her to a contract for a one-time appearance in Down Argentine Way. The film was supposed to be an Alice Faye vehicle, but she got knocked up and Betty Grable stepped in. The movie turned Betty into a star and Carmen into a sensation, prompting Fox to give her a long-term contract. “Hollywood, it has treated me so nicely,” said Carmen, ” I am ready to faint! As soon as I see Hollywood, I love it.”

But haters gonna hate, and Miranda’s popularity in the United States pissed off lots of folks back home. When she returned to Rio she was met by cheering fans, but the Brazilian press started really laying into her for being a Latina bimbo pawn of American commercialism. Members of the upper class felt her image was “too black” and one Brazilian newspaper criticized her for “singing bad-tasting black sambas.”

See, while Carmen’s dad may have been besotted with opera, Carmen had adopted the indigenous musical genre, the samba, with roots in African religious traditions imported to the New World courtesy of the West African slave trade. Today, along with painfully thin strips of pubic hair, the samba is Brazil’s most conspicuous export and synonymous with their national identity. But back in the 30s it was considered low class, trashy, and “bad tastingly” black. Miranda, a convent-raised, bourgeois European girl, should get serious cred for being open and soulful enough to embrace the sensual cultural expression of the “lower-class” natives. (Some folklorists suggest the word samba is derived from an African word Semba, translated as umbigada in Portuguese, meaning “a blow struck with the belly button”.)

“Look at me and tell me if I don’t have Brazil in every curve of my body.” — Carmen Miranda 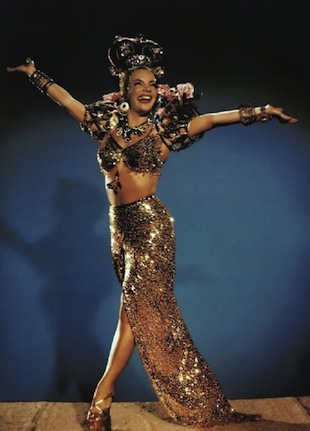 Bitchy Brazil society and mainstream media were down on our heroine for being somehow too Brazil and not Brazil enough. At a charity concert organized by Brazil’s First Lady, Miranda greeted the high society audience in English and was met with silence. When she began singing the audience booed her. She tried to finish her act but the booing escalated and Carmen left the stage to sob in her dressing room. Weeks later, Miranda responded to the criticism with the song “Disseram que Voltei Americanizada” (“They Say I’ve Come Back Americanized”). Still, the criticism devastated her and she didn’t return to Brazil for nearly 15 years.

But back in the USA, the “Brazilian Bombshell” pulled in audiences in movies theatres, Broadway theatres, and nightclubs. She became one of the first Latinas to leave footprints in the cement outside Grauman’s Chinese Theater and by the end of 1941 she was earning $5,000 a week. By 1945, Miranda had become Hollywood’s highest-paid entertainer (and incidentally, the top female tax payer in the US).

By the way, it may surprise you to know that this formidable force of nature was really tiny — some say she was 4’8”, and even the tallest report only has her at 5’2”. She ingeniously had high platform shoes and towering headdresses that helped give the impression of height. Carmen’s fabulous shoes and hats were an inexorable part of her persona.Today Miranda’s famous for those enormous heels  and fruit-laden hats, and her costumes and style were fairly influential during the war years. In 1939 Saks Fifth Avenue developed a Carmen-inspired line of turbans and jewelry. In fact, many costume jewelry designers made “Mirandized” fruit jewelry highly prized by collectors today.

But in the Post-War years, Americans’ taste for fabulousness had worn thin. The public lost interest in musicals and Miranda’s gaudy naughty novelty. Her career declined and in January 1946 her contract with Fox was terminated. She tried to branch out, going so far as to portray an Irish-American gal in the film If I’m Lucky, but audiences finished the sentence with, “I will get my money back” in their heads. To put it bluntly, Carmen had jumped the shark.

In 1947, Miranda married American movie producer David Sebastian. The marriage was tempestuous and it looks like Sebastian was physically abusive. They separated in ‘49 but later reconciled. (Picturing our feisty Carmen being slapped around by some douche-y Hollywood tool fills me with a feverish mix of anger and sadness.) This rocky relationship with this utter creep probably contributed to her escalating amphetamine and barbiturates habit. Factor in her heavy smoking and drinking, and it’s clear Sebastian wasn’t the only one handing Miranda’s body a beating. 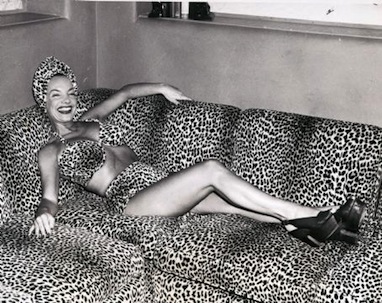 Still, Carmen was a popular attraction at nightclubs, and she even teamed with The Andrews Sisters to produce and record several singles. She made her final film appearance in a 1953 Martin and Lewis movie (the aptly titled Scared Stiff), did a European tour the same year, but after collapsing from exhaustion during a club performance in Ohio her doctor suggested she return to Brazil to rest. She was still smarting from the criticism she’d received years ago, but was overjoyed when she received a warm reception this time, and she stayed in Brazil for several years.

In August 1955, though she felt unwell, ever the trooper Miranda taped a segment for the “The Jimmy Durante Show” but collapsed after her number. Around 4 in the morning she suffered a fatal heart attack in her bath. In accordance with her wishes, Carmen’s body was flown back to Brazil. The government declared a period of national mourning and 60,000 people attended a mourning ceremony while more than half a million Brazilians escorted her funeral cortège. (Even in death her image was daunting; during her funeral the Catholic priest presiding over the service only agreed to perform the ceremony if Carmen wasn’t wearing any make-up, so her corpse would be “pure”.)

Today Carmen is primarily remembered as a camp icon who embodies either fruity fabulousness or stereotype stupidity. But there was a woman under those hats, a heart and a brain and the will to fashion her own self-determined, self-perpetuated creation. She was a promotional genius, a branding savant and creative force to be reckoned with. The fact that this Carioca caricature is still recognized and even revered today is testament to Carmen’s savvy and staying power.

A few years ago a documentary, Bananas Is My Business, detailed her life’s struggles and successes, including interviews from actors and early boyfriends (“She had eyes like the headlights of a car,” sighs one beau). We see a woman who was almost always “on,” who wore her public persona “like a mask that could not be penetrated.” Her life was a mix of contradictions. She was a victim of Hollywood machinery but also an astute manipulator and purveyor of her image. She was an effervescent spitfire who suffered addictions, depression, an abusive marriage and electroshock therapy. She felt trapped by but never resented her alter ego.

Maybe those paradoxes are part of what attracts me. When I was in Rio de Janeiro a few years back I even made a pilgrimage to the Carmen Miranda Museum, where you can see several original costumes and clips from her films. I see Carmen Miranda as a complex woman with brains, bravery, audacity and a playful, joyous spirit. Of course I love her for her flamboyant fabulousness, but I also admire her savvy and her strength. Carmen has gumption, guts, and glamour. She was, in a word, a dame. 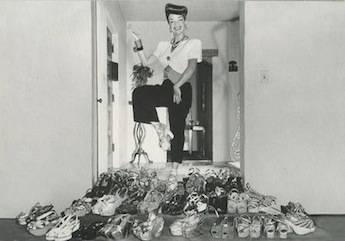 How do you feel about the “Brazilian Bombshell”? Have any questions about Carmen you’d like answered? Let me know.