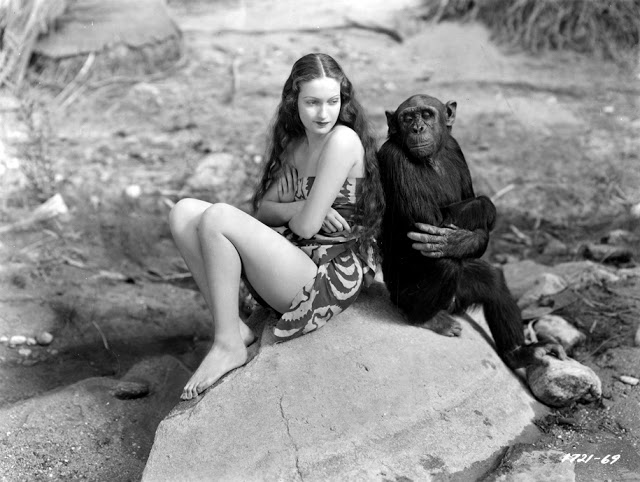 Be honest, what part of the phrase “Jungle Princess” do you not like? When I was in 4thgrade, I chanced upon a movie where a young girl and tiger cub are orphaned and end up growing up together in the jungle (as you do).  Now, I haven’t seen this movie for decades, so I could be wrong about a lot of these details, but it left a serious imprint.

“Ulah” grows up to be a young Dorothy Lamour with the most gorgeous waist-length hair. (The slight frizziness only adds to its beauty.) She is BFFs with the tiger and all the jungle creatures, including a chimpanzee. Little animal-loving, feeling-orphaned me thought of this as absolute heaven. Tiger bestie! Chimpanzee confidante! Beautiful hair!

Anyway, back to Ulah. Freed from any human society’s cultural dumbities, she has no filter or femininity conditioning. (A trait I shared, despite a buttload of failed conditioning.) When Ulah comes into contact with a man (Ray Milland, a clueless British anthropologist or something), her curiosity quickly becomes lust and she makes no bones about wanting to get going about getting it on. Ray’s character is kind of freaked out by all this forwardness and besides, he has a bitchy fiancée waiting back at camp. When Ulah and her tiger buddy go back with Ray to the natives’ village and the British folks, everyone is freaked out – the natives especially. (To be fair to Ray’s fiancée, I’d sulk too if Dorothy showed up in her sarong, all hot for my man.) Anyway, in the end the superstitious natives try to kill Ulah and her ape friends show up to save her. #squadgoals

I’ve since learned that The Jungle Princess was actually Dorothy Lamour’s very first credited screen role. In her autobiography, My Side of the Road, she talks about winning the audition pretty much on the strength of her letting down her waist-length hair (very unusual for the mid-30s) and a flower behind her ear. She glosses over her exotic good looks and her excellent singing voice. In The Jungle Princess she sings “Moonlight and Shadows” (remarkable for a character who speaks almost no English), a song which became a number #1 hit. The sarong Dorothy rocks in The Jungle Princess was invented by Edith Head, the queen of movie clothing designers. (I spotted her in an episode of Colombo the other night and literally squealed. I mean, she is the OG film designer, maybe rivalled by Adrian.) Dorothy was not happy with the sarong; she thought she’d get to wear glamorous gowns in the movies, not the equivalent of a towel. (Little did she know that tropical towel would be her lifelong legacy.) She was also upset that her feet would be showing. Dorothy Lamour had a huge insecurity about her “ugly feet”. She was so unhappy about them the design department made up rubber false feet to disguise her real feet, but they kept making her slip so she eventually just had to brave showing her feet in films. (Isn’t this just so sadly typical of women?) And Dorothy, besides, NO ONE is looking at your damn feet, not with those eyes, that hair, and that sarong. (They did give her rubber boobs though, that occasionally floated to the surface when the “princess” swam in the film.)

So, who was Mary Leta Dorothy Slaton before she was jungle and “Road” royalty?

Well, though she had no vocal training or experience, at the tender age of 16 Dorothy Lamour left her hometown, New Orleans, to hit ‘the road’ to Chicago to pursue a career as a big band singer. She worked as model and an elevator operator. (Elevator operators! Be still my heart!) She ended up as a singer with Herbie Kay and his Orchestra* and turned down screen tests with M-G-M before signing a contract with Paramount. Not only was The Jungle Princess her first film, she even got top-billing over Ray Milland in her first picture!

I’m pretty sure thousands of girls left home for a glamorous career but Dorothy Lamour not only made it, she crushedit. Dorothy and the movie were so popular it became the catalyst for lots of similar sarong-y films, like Her Jungle Love, Tropic Holiday, Typhoon, Hurricane, Aloma of the South Seas, Moon Over Burma, Rainbow Island…you get the drift. Lamour was also in a star-studded review for Paramount where she, Paulette Goddard and Veronica Lake did a number called “A Sweater, a Sarong and a Peek-a-Boo Bang”. (It was Lana Turner who was really the sweater girl, but whatever.) 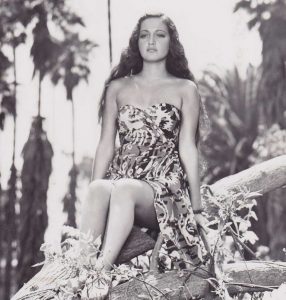 Naturally, Dorothy’s best known as the spunky love interest in all (almost) the insanely popular Bing Crosby and Bob Hope “Road” movies.  It all started with Road to Singapore and then Dorothy held her own with the ad-libbing duo as the co-star in all their subsequent half a dozen “Road” movies – except one. In the last “Road” movie, made in 1962, Dorothy is replaced by Joan Collins. Seems that Dorothy made the unpardonable sin of being over 40, and Bing wanted a younger actress to be his ancient ass’s girlfriend.  (Can you hear my teeth gritting?)  Bob Hope refused to make a “Road movie” without Dorothy, so she got a cameo in the movie.

Dorothy Lamour kept busy working on stage and TV, and young me was so excited when she’d pop up in a “Love Boat” or “Remington Steele”. Lamour had married her second husband, William Ross Howard III, in 1943. They had two sons and they stayed married until Howard’s death in 1978. Dorothy died at home in 1996 at the age of 81. I wanted to include her in my Hall of Dame because:

Dorothy Lamour’s road to damehood had twists, turns and rubber feet, but her brains, bravery and beauty saw her through to the end.

*She married Herbie in 1935 and divorced in 1939; her movie stardom likely played a role.