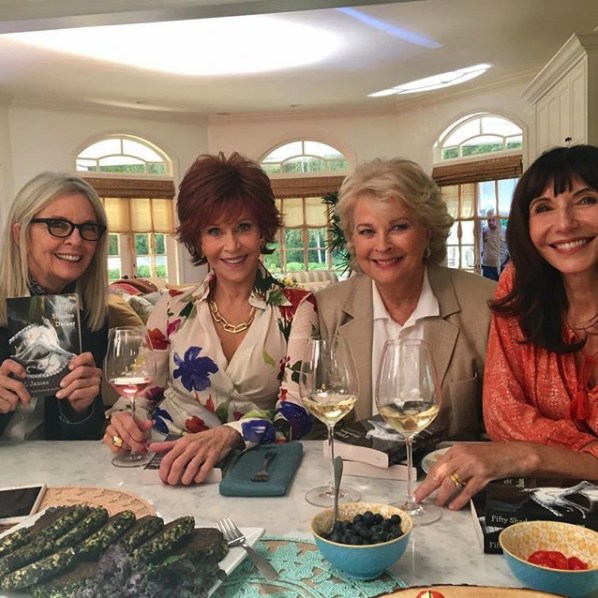 Since I can’t be pried off the couch to stop watching my endless parade of Law & Orders, we are very lucky to have guest blogger, and my friend of 40+ years, Holly Abrams, give us her insights into the recent movie, Book Club — aka “Isn’t It Totes Adorbs When Old Girls Still Like Sex?”

(Spoiler Alert: To discuss the movie’s flaws, I have to talk about the conclusion—which will surprise no one who has ever seen a rom-com—but you have been warned.)

Book Club is the light comedy offering counter-programming to superheroes and action stars at the global multiplex. It stars four actresses (Jane Fonda, Diane Keaton, Candice Bergen and Mary Steenburgen) famed for their storied careers…all of whom saw their heydays decades ago.  It is a joy to see them all clearly relishing performing with each other, particularly as they spotlight a criminally overlooked portion of the movie-going audience: women of a certain age.  Falling into that category myself, I wanted to LOVE this movie. But, in the end, I found myself frustrated by the movie’s view of its protagonists.  Three of the four have successful careers; all seem to have fulfilling lives with and without men as friends, family and co-workers.

Eyes roll when the most sexually active of the four chooses Fifty Shades of Grey as their monthly book club subject.  This mirrors my own experience. I, along with several friends, am a fan of EL James’ torrid trilogy; but I know others who fervently hate it, and we agree to disagree.  Soon the book becomes a catalyst for our heroes to begin examining their own love lives.

Here is where I, as a moviegoer and a woman of a certain age, began to feel the patronizing shadow of the mansplainer. While these women are alternately entertained and embarrassed by the content of the book, the implication is that it inspires them to “fix” their lives.  Sex-positive Jane Fonda opens herself up to intimacy so she can fly away with an old flame, a development that ignores the demands of the hotel she owns. (Hey, who cares, she’s found love!)  Diane Keaton, the shy widow (almost completely identified by her widowed status and the frightening insensitivity of her adult children) is swept off her feet by the kind of dashing and uncomplicated beau only found in rom-coms.  Mary Steenbergen, the frustrated wife of a retired businessman, ends up spiking his drink with Viagra. (It’s played for laughs, but rather horrifying in this age of consent. Men’s Lives Matter Too!)  Candice Bergen, the distinguished judge, is subjected to every possible romantic indignity: the perils of online dating (including humiliating computerized alerts when she is supposed to be working); the ex with the much younger fiancée, and; the technical glitch that makes her profile picture an image no woman would ever allow.  She is the one the movie doesn’t pair off.  (Still, the last scene of the movie shows her re-activating her dating profile…hope springs eternal?)

I need to mention that this movie was directed and co-written by a man.  Which is not to say that men can’t understand how women of a certain age feel about life and love.  But I have to wonder if the movie’s insistence on portraying four accomplished women — inspired by a smutty novel to remake their lives in ways that may (or may not) lead to bliss — stems from a man’s point of view.  In the world where my friends and I live, the hotel owner would not dump her prosperous business for a man. The widow would tell off her smugly over-protective children (and maybe meet a nice guy). The frustrated wife would seek marital counseling — or a good lawyer — before poisoning her husband.  And the judge?  Would she keep risking debasement in the name of finding that special someone with whom to enjoy a movie?

These movie’s conclusions don’t define women’s lives — except in rom-coms.  Don’t get me wrong, I would love to see more mature actresses get starring roles and I do want Hollywood to keep making rom-coms.  But there is a multitude of layers to a woman’s life at every age and I have to believe there are realistic and entertaining stories to be found in them.  Forcing their stories into happy-ever-afters (tied up with condescending nods to novels some of us actually enjoyed) may not be the best way to do it.

So, dames out there: Do you agree with Holly’s take? Let us know!