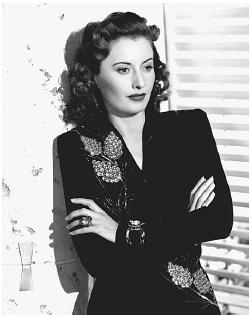 It’s tough to really commit to doing what Jesus would do in any given situation. I’m not generous enough, wise enough, or turn water into wine-y enough. There are T-shirts that suggest one do whatever Joan Jett would do, but I’m not bad ass enough. Not good enough to be Jesus, not bad enough to be Joan — I need a role model whom I can realistically emulate. As I sashay (ok, waddle) through life, I’d like to do so with intelligence, humor, grace and guts. I’d like to be capable of both sacrifice and sexiness. I’d want to have a big heart, a strong self of self, and to be able to do a cartwheel whenever I feel like it. In other words, I’d like to be Barbara Stanwyck.

You’ve probably seen Barbara in a couple of her more famous roles —The Lady Eve, Ball of Fire, Double Indemnity or Stella Dallas. (By the way, you need to see all of those, stat.) But if you’ve only seen her as the devious Phyllis Dietrichson in Double Indemnity, or the self-sacrificing rachet mama in Stella Dallas, you’re missing out. One of the most talented and versatile of classic movie actresses, Stanwyck is the ultimate embodiment of the iconic dame. (In fact, when she died, every obituary copiously used the word.)

Despite a wealth of roles where she plays all kinds of woman in all walks of life, Barbara Stanwyck carries with her a certain inherent dame-ness that comes through with every character. She seamlessly combines sensitivity and toughness, courage and vulnerability, insouciance and substance. She could be regal and sexy and formidable, says Karen Stabiner, “She could say more walking slowly down a staircase or putting on a shoe than most actresses could in a five-page monologue. She managed somehow to be tough and brassy as well as sensitive and expressive.”

Quick with a quip or a savvy insight, yet she always proves to be as soft of heart as she is sharp of wit. She’s a real straight-shooter, except when she isn’t, but even films where she’s plotting and scheming, there’s a no B.S. quality to even the most deceitful character.

Though not one of the screen’s great beauties in the style of a Hedy Lamarr or Ava Gardner, the audience never doubts her seductive powers for a second. Add to that her underlying steely determination, street-wise savvy and heartbreaking vulnerability, and you get a package that’s hard to beat. 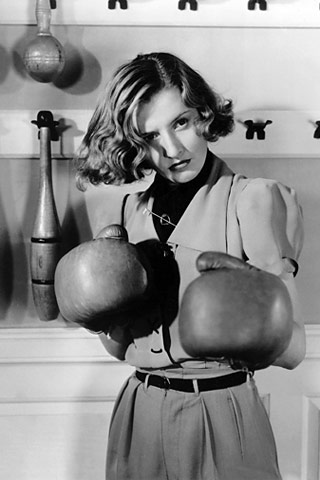 No doubt these qualities were the product of her hardscrabble childhood. Born Ruby Stevens, when she was only 4 a drunk man pushed her mother off a streetcar. Her mother died, and soon after her father abandoned little Ruby and her 4 siblings. She was shuffled from one foster home to another, picked up cigarette smoking at age 9 along the way, and at 15 began working as a chorus girl in speakeasies. Just stop for second to think about what kinds of abuse, molestation, and horrors young Ruby must have encountered before changing her name to the less Brooklyn-y Barbara Stanwyck at 18.

After a brief stint on Broadway, Barbara came to Hollywood with her first husband, Broadway star Frank Fay. She persuaded Frank Capra to use her in Ladies of Leisure and her performance started her on the road to stardom, as well as cementing her as Capra’s favorite leading lady – he used her in many more films over the next 10 years. (He also professed to having a big crush on her, as did many of her co-workers among the cast and crew. He claims to have proposed to her during the making of Forbidden – while she was still married to Fay.) 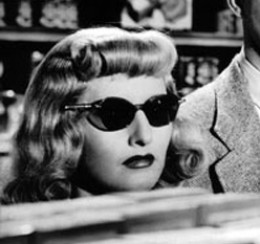 Foxy and feisty, femme fatality came easily to Stanwyck on the screen, effortlessly seducing the likes of Henry Fonda, Gary Cooper, and William Holden, and icily snaring and shooting Fred MacMurray’s otherwise savvy Walter Neff in Double Indemnity. In Baby Face she stars as a seductive golddigger in the pre-code film that brought on new censorship rules with all its racy pre-codeness. But off-screen, she didn’t always have the upper hand. Frank Fay’s drinking and pouty petulance as Babs’ star eclipsed his ended their marriage, and matinee idol Robert Taylor walked out for good after 12 years. (When she landed Taylor in the late 30s it was considered quite a coup; he was considered the handsomest of leading men, though I always found him to be too pretty and kind of a sap. He spent his wedding night with his mother, need I say more?) Despite the fact that he had cheated on her and caused her a lot of grief (there’s talk of her suicide attempt in the early 40s), Barbara completely lost it at Taylor’s funeral and always referred to him as the love of her life.

One of the reasons co-stars like Stephanie Beacham called Stanwyck a “stand-up dame” was her legendary professionalism. She came early to the set, hung with the crew, always knew her lines, and did as many of her own stunts as they’d let her. (She let herself be dragged dozens of feet behind a horse well into her 50s.) She was a trouper through and through, with not a drop of diva in her. Maybe that’s why she wasn’t prone to putting up with it in others. During her last acting job, a 1985 stint on The Colbys, Barbara was getting ready to do a scene, when a co-star said, “I don’t feel it right now. The vibes aren’t right.’” According to producer Aaron Spelling, “Missy” (as friends called her) told the starlet, “Fuck your vibes and get your butt in here and start acting!” 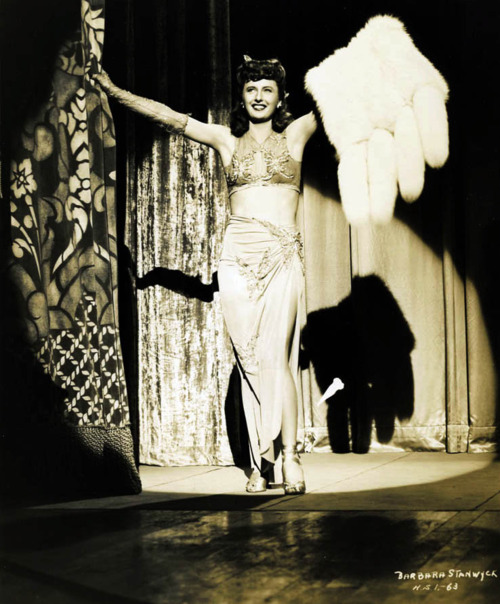 Linda Evans remembers Stanwyck telling her that a certain Big Valley scene needed more presence. When Evans asked what she meant, Stanwyck said she’d show her during the next take. “As the rehearsal went on, I waited for an explanation from Stanwyck about ‘presence,’ but she didn’t say anything,” says Evans. “I had to walk in this door and walk into the scene, but she didn’t come over. Finally the director said, ‘Action!’ She came over behind me just as we were supposed to walk in the door. I thought, ‘When is she going to tell me what to do?’ Then, as I opened the door, she picked up her boot and kicked me in the butt! I went flying onto the set with my eyes wide open and she said, ‘Now that’s presence!'”

“Missy” had a history of being supportive of other actors, and they were very appreciative. Both William Holden and Robert Preston loved to gush about how Barbara helped them when they were young and uneasy co-stars. They had crushes on her, as did Henry Fonda. And let’s not forget Robert Wagner, who had an affair with our Barbara when he was 22 and she was 45!

Perhaps my favorite Barbara Stanwyck anecdote involves asking for a hotel room in Indianapolis. There for a movie with Clark Gable, the studio put up its stars in the best hotel in town. When she came into register, she was told her maid and companion could not stay with her; the hotel was “restricted – no coloreds allowed.” Unfazed, Barbara said, “Well just tell me the name of the best Negro hotel in town and we’ll go stay there.” The hotel ending up relenting and Stanwyck and her companion got their room.

That tiny incident evinces Barbara Stanwyck’s grace, gumption and class. You can tell right away that she was indeed “a stand-up dame.” That’s why, when I’m wondering how to behave in a given situation, I feel I can’t go wrong if I just ask myself, “WWBSD?”