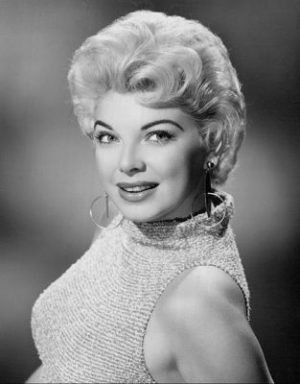 Barbara Nichols was THE go-to woman when you wanted an actress whose very casting spoke volumes about the character. Why use exposition or the script to communicate that a character has had to use her appearance and sexuality to get through life when you could just cast Barbara? Her blonde hourglass silhouette and high-pitched New York accent was code for a particular backstory and code for a female stereotype all-too familiar to movie and TV viewers. A popular cheesecake model in the early 50s, Barbara Nichols rivalled Marilyn Monroe in the shapely none-too-bright blonde department.

Nichols was originally a brunette, and her real last name was Nickerauer. (Try saying that 3 times fast.) She changed her name and her hair, and soon Queens-born Barbara became “Miss Long Island” and eventually Hollywood’s reliable bosomy bimbo. (She was also named “Miss Dill Pickle.” Respect!) Her physique launched her career, appearing in both the 1952 Broadway revival and film version of Pal Joey. The “Dame with the Shapely Frame”, Barbara’s pin-up persona helped put her in A-list films alongside A-list stars like Clark Gable, Gary Cooper, Frank Sinatra, Susan Hayward, Sophia Loren, Doris Day, Janet Leigh, Tony Curtis and Burt Lancaster.  (In the film version of Norman Mailer’s The Naked and the Dead, she co-stars with another pin-up queen, burlesque superstar Lili St. Cyr.)

I first became aware of Barbara Nichols as the anxious protagonist in the classic “Room for one more, honey” episode of The Twilight Zone.  (The show’s title is actually Twenty-Two.) As a kid I watched Twilight Zone re-runs after school , and this one was one of my favorites. (It’s also one of the ones I found the scariest. To this day, I am fully prepared to let a lucid dream stop me from boarding a plane, bus or bicycle.) I’d recognize her as the “Room for one more, honey” lady when she popped up in episodes of The Beverly Hillbillies, Hawaii Five-O, Green Acres, Adam-12,and The Untouchables re-runs.  Barbara Nichols was also villain Maid Marilyn (get it?) on two episodes of Batman! (Opposite Robin’s ‘hood’ Art Carney as “The Archer”) #dadjokes

Her parts in movies have Barbara Nichols owning the niche of the dim-witted yet wisecracking stripper, cigarette girl, gold-digger, gangster’s moll and pretty much owning the whole floozy phylum. Still, I’ve always been impressed with how Barbara managed to make the most of this tired stereotype, always bringing out pathos and humor, sometimes both simultaneously. Her shape and breathless New York-accent may have given Barbara her start, but in a world with no shortage of pneumatic numbskulls, she managed to stand out.

Likely most people know Barbara Nichols from her role in one of my all-time favorite movies (and that’s saying a lot), The Sweet Smell of Success. As Rita, Barbara is funny and completely heartbreaking as a good-time girl who’s had a bad time in life. (If you’ve never seen the movie, you MUST see it ASAP. Not necessarily just for Barbara Nichols, but because it is just awesome. THE movie about 50s New York, with a script jam-packed with memorable lines.)

It’s no surprise that as Barbara got older, the roles got fewer. Complications from car accidents in her youth also forced her to slow down, and her health deteriorated to the point that Barbara Nichols’ life ended all too-soon. She was only 47.

One of the many supporting players who hold up the movies and linger long after they’re finished, Barbara Nichols definitely deserves a place of honor in the Hall of Dame.