Aretha Franklin wasn’t just a soul singer.  Aretha’s soulful pursuits extended well beyond the stage and recording studio. Spirituals weren’t just songs to Aretha – spiritual discipline was a way of life. Not that we need it, but on my wall hangs proof. More about that in a bit.

As Michael Eric Dyson wrote, Aretha “could trap lightning in her mouth at a moment’s notice and shout down fire to earth.” I’ve been a fan as long as I can remember. As a first-grader, accompanying my mother on an errand, I heard the song “Think” playing in a store. I remember it clearly. I stood frozen by what I was hearing. The lyrics appealed to me, of course; six-year-olds can be petulant when they aren’t treated with adequate consideration. But it was that voice, and that undefinable thing that made that voice ‘that voice’, that absolutely mesmerized pre-formed me. In the world I inhabited, books and TV showed women as demure princesses or female eunuchs with painted on smiles. In reality they seemed an expressionless lot who bore their lives with exasperated sighs. But THIS — this was that lightning Dyson spoke about, breaking through the clouds. Here was a woman with strength, savvy, self-respect, with agency and a voice she wasn’t afraid to use.

Like millions of others, I became a lifelong fan.  I loved the hits, but my all-time favorite is the live Amazing Grace album.  It “relates to religious music in much the same way Michelangelo’s Sistine Chapel relates to religious art. In terms of scope and depth, little else compares to its greatness,” said producer Jerry Wexler. Whether it’s sacred or secular, Aretha’s music interweaves both spiritual and sexual longing until they are one braided fierce or plaintive plea. Elegiac grace and a buoyant hunger for life canco-exist – Aretha says so! She gave me a permission and a path that live on along with her voice and those songs. 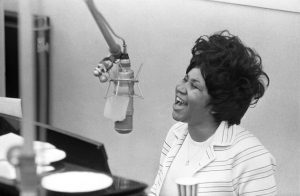 Aretha’s anthems of self-respect, racial pride and feminist indignation are precious parts of our collective experience. But I am doubly lucky. I have an additional piece of Aretha that I cherish as much as I do her musical legacy.  Years ago, at an antique show in New York City, I spent what was for me a great deal of money on an even greater artifact. It was a piece of paper on which Aretha Franklin has written her rules for Spiritual Discipline.

I put them in a pink frame. I cherish them. Let me share them with you:

To not engage with negative people who are trying to bait you, insult or bother you is always good advice. I wonder if Aretha put quotation marks around “Never” because she recognized that to take “never” literally is too monumental a task. Perhaps she underlined “Devil-minded” to underscore their distinction from us rank and file non-Devil-y types. Anyway, I need to work on this.

Rule 2: Let your spirit control your mind which controls your body.

I think Aretha is trying to let her intuition – that little voice that some call spirit – handle tough situations. “Lean not unto thine own understanding.”  In other words, the good ole “let go and let God”. I think a certain amount of surrender is very sage advice.  The Stoic philosophers advise letting go of the reins sometimes, don’t fret and try to control the uncontrollable. They said Amor Fati, i.e., “love fate”. Relax and look for the opportunities within obstacles, make lemonade from lemons. The only fly in the ointment: When I tell myself to let my spirt control mind (and by default what I charitably call my ‘body’) I am using my mind. It’s a conundrum I’ve haven’t mastered. Maybe Aretha did.

Filter-less, impatient me checking this one off? Unlikely.  I tend to jump in and jump at whatever it is, from debates to fencing classes. But I know Aretha is right: some reflection and looking before leaping never hurt anybody.

Again, I’m wondering if Aretha put “never” in quotes realizing that neverbeing angry is quite the Herculean task. Personally, I could never commit to “never”.  But Aretha also underlined it, so while she wisely gets how unrealistic “never” may be, to strive for an anger-less existence is well worth the effort.

Rule 5:  Be a peaceful and loving spirit.

Again, well worth the struggle. As unlikely as my being a success may be, I should take another crack at it,

I know this is a great way to be empathetic and really try to understand the other guy’s point of view. But if you’re a Trump voter, or full of shit, I’m going to have a very hard time.

Rule 7: “Trust in God” with all your spirit (and lean not to your own understanding, your mind).

This is very much like Rule #2. Whether you put your faith in a Supreme Being, the Universe, Ralph Waldo Emerson’s Oversoul or “fate”, it’s often wise to let go and let <fill in the blank>. I don’t know about you, but often my mind, my “own understanding”, is my own worst enemy.

Rule 8: Always be kind, and never turn to hate.

You can’t help but notice there are no quotation marks around “Always”.  Maybe Aretha gave herself some slack for “never” but recognized that there is no situation or context in which kindness is not warranted. In fact, if one only followed Rule 8, you’d be pretty set.

Aretha Franklin had a big life, befitting a Queen, but it wasn’t always an easy or wonderful life. She gave birth at age 12 (!) and became a mother for the second time at age fourteen.  Her first husband beat her. (She was likely thinking about this when she sang “Respect” and “Think”.) She went through two divorces and struggled with her weight. Through it all she was staunchly courageous, including her private stoicism during her lengthy battle with pancreatic cancer.

But despite her difficulties and the beautiful spiritual discipline she penned, Aretha never shied away from a fight. She offered to post bond for jailed revolutionary Angela Davis, opposing her father’s wishes. Aretha said: “I’ve been locked up (for disturbing the peace in Detroit) and I know you got to disturb the peace when you can’t get no peace.” Perhaps that’s what I subconsciously understood as a little girl when I heard her sing “Think” for the first time.  I marveled at the confidence and indignation women weren’t supposed to acknowledge. I felt the exigence in her voice. That voice knows sometimes we have to disturb the status quo. We need to fight for peace.

Aretha Franklin fought for peace her whole life, and we can relieve our grief some knowing she’s found that peace. Her fight is all over, but luckily for us, her voice is still doing the job here on Earth.