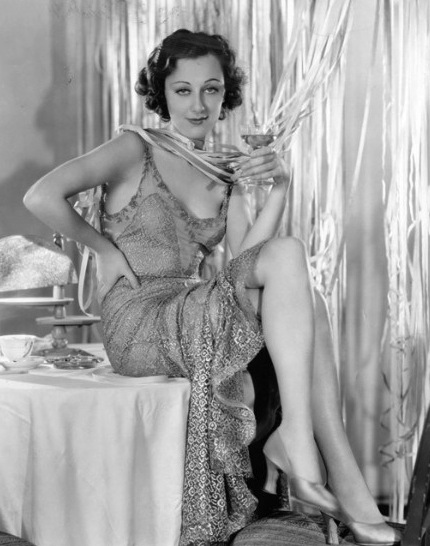 What would you do if you had to choose between becoming a famous movie star or traveling the world with the love of your life?  When she was just 20 years old, Ann Dvorak made just that choice, and it changed the course of her life.

If you love classic movies — and you love cool, confident chicks – trust me, you will love you some Ann Dvorak. (Most people pronounce it wrong, like d-VOR-ak, so I do too.)  It takes beauty, brains and balls to be a successful movie actress, and Ann had all three. Unfortunately, where the smarts and the sultry all paid off, she turned out to be a little too smart and sulky for her own good.

I first became enamored of Ann after seeing the pre-code movie Three on a Match (1932).  True, she does have the juicy part of a high society wife who gets sexually enthralled by Lyle Talbot, hooked on cocaine, slapped around by Humphrey Bogart, and writes in lipstick on her nightgown. But she plays it with the kind of honesty and ferocity that makes me love good pre-code movies so much. The movie also stars dame Hall of Famers Bette Davis and Joan Blondell, but the movie is all Ann’s. (The only sour note is the cloying, randomly Southern accented voice of that annoying kid. You almost want to see him get killed. Hey, I said almost.)

Like me, writer, archivist and super cool chick in her own right, Christina Rice also fell under Ann’s spell after seeing Three on a Match. But whereas I just became a fan and made a point never to fall under anyone’s sexual spell (at least no one as douche-y as Lyle Talbot), Christina went on to become a collector and write Ann’s long-overdue bio, Ann Dvorak: Hollywood’s Forgotten Rebel. I recently caught up with Christina to help combat this whole “forgotten” thing and tell us all about why Ann was so special, what made her a rebel, and the stiff price she paid for being one.

Tell us, in a nutshell, what’s your book about?

Ann Dvorak: Hollywood’s Forgotten Rebel is about a Golden Age film actress who seemed destined to become a legendary movie star, but instead she followed her heart, fought the powerful studio system, and paid the consequences.

I initially became drawn to Ann when I was in college in the mid-1990s and watched the film Three on a Match. I ended up being blindsided by Ann’s performance as a bored society woman who throws privilege away for drugs and hot sex with Lyle Talbot. Simply riveting. She was just as good in other films I came across like Scarface and G Men and I was baffled why she didn’t become a bigger star. I didn’t find much information about her at the time and after a while I figured if no one else is going to write a book about her, maybe it should be me. Of course I was in my 20s, very naïve, and had no clue that it would take 15 years to finish it!

What made doing a book on Ann so compelling? Why should people today care about getting to know Ann Dvorak?

Ann was a complex person who experienced a hell of a lot during her life, so her story can be interesting to someone who is not familiar with her films. She was born into show business by parents who were entertainers in vaudeville and early film, she was briefly a child actress and later a chorus dancer at MGM where she was mentored by Joan Crawford. She worked with some of the most prominent actors and directors of her day. In 1940, she traveled through hostile waters in order to join the British war effort as a correspondent, ambulance driver, and camp show performer, among other things. Her interests varied from bacteriology to hat-making, and she penned an 18-volume history of the world and made an audio-book of it! To top it all off, she was one hell of an actress.

Wow, she sounds like a dame and a half! It’s a shame the book has to be subtitled the “Forgotten Rebel” Why isn’t Ann more well-known today?

During the first half of 1932, Ann was in a position to become a very well-known film star. Her first credited role was opposite Paul Muni in Scarface where she was second-billed and generated enough buzz that the press dubbed her “Hollywood’s New Cinderella.” Warner Bros. became infatuated with her and paid a princely sum to Howard Hughes for her contract and gave her strong roles in Three on a Match and The Strange Love of Molly Louvain. While filming that latter title, she fell in love with co-star Leslie Fenton and eloped a few weeks later. Fenton was a freelance actor who loved to travel, so he didn’t believe in long-term contracts. He also wasn’t bothered by the fact that Ann DID have a contract with Warner Bros. and convinced her to walk out and go on an 8-month European honeymoon. The studio put her back to work when she returned, but they seldom gave her showcase roles after that. She was never able to regain that early momentum.

So she jumped ship after getting a contract to go away for a whole year, and complained a lot about her salary in the press, ostensibly to get Warner Bros. to pony up more so she’d come back from her “vacation.”  Is that why you call her a rebel?

Leslie Fenton convinced her to walk out on her contract and at that time her agent convinced her that complaining about her salary and bad-mouthing the studios was a wise idea, which it wasn’t. Ann was only 20 at the time and heavily influenced by her husband, but at the end of the day Ann went along with it all and should probably shoulder most of the blame for tanking her own career.

The term “rebel” in the title mainly refers to Ann’s 1936 court case where she tried to get out of her Warner Bros. contract, claiming they unlawfully suspended her. She did not win the case, though it’s worth noting that she filed her suit prior to James Cagney and Bette Davis who were also Warner contract players who took the studio to court in 1936. Ann’s actions must have played some role in influencing them, yet their actions are frequently noted by film historians, while Ann’s efforts have been largely ignored.

What are some of the big takeaways from Ann’s life story?

The biggest take away from Ann’s story is probably – don’t fuck with Jack Warner! Seriously though, I hope she will now receive credit for being one of the earlier contract players to take a studio to court and place her actions within the context of the suits that came after her, including Cagney, Davis, and even Olivia de Havilland in the 1940s.

I think it’s also interesting to note that the question of “Can women have it all?” isn’t a new concept and was something Ann struggled with. She wanted to be the good wife and the great actress and had trouble balancing both which is an unfortunate theme of many actresses of the time.

Tell us about Ann’s movies. What are the “essential” Dvorak films one should check out?

Ann made over 50 films, but the standouts are sadly few and far between since she compromised her career so early on. Her performances do reveal an actress with a great deal of raw talent who could absolutely shine when working with a director like Howard Hawks or George Cukor.  Her early films also reinforce a point we were already aware of – that pre-Code films are divine.

Scarface, Three on a Match, The Strange Love of Molly Louvain, and Heat Lightning are some of her strongest titles, which also happen to all be pre-Codes. Post-Code, I would suggest Housewife, G-Men, and Girls of the Road, and post-War choices are Private Affairs of Bel Ami, Our Very Own, and I Was an American Spy. An honorable mention is A Life of Her Own where Ann gives an Oscar-worthy performance in what find to be a fairly unwatchable movie.

Lastly, would you say Ann is a “dame”? If so, what makes her a dame (in life and on the screen)?

That’s an interesting question. Ann always seemed to have an underlying air of refinement, so I have never thought of her as a dame in the way someone like Jean Harlow was. For example, in The Strange Love of Molly Louvain, she’s quite good in the early part of the film as a jilted girl from the wrong side of the tracks mending her broken heart. Later on however, when she’s verbally sparring with a fast talking reporter, played by Lee Tracy, I think she’s less effective rattling off those “damey” lines than an actress like Joan Blondell or Glenda Farrell would have been. Still, anyone who could shine so brightly during the pre-Code era has got to have some dame in them!

Off-screen, it at first seems like Ann was very independent and quite the renegade what with walking out on her contract and later suing her studio. In reality, she was always very heavily influenced by the men in her life, so she’s not quite the real life dame that contemporary Bette Davis was.

Christina, thank you so much for giving us your time – and for writing this amazing book! You are certainly a dame and half, and I’m not just saying that because you’re my new girl crush and we have the same bangs. (Though that certainly doesn’t hurt!)