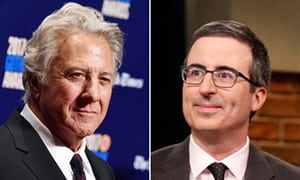 TIME Magazine made women and the #metoo movement 2017’s “Person of the Year”. Nice start. Now it’s time for the other half of the human race to step up. For real change and understanding to set in,  2018 needs to be the year of #MENtoo.

Some are already on board, and that’s why I admire AF and love Mr. John Oliver. And Dustin Hoffman, you’ve got a lot of ‘splaining to do.

Like lots of other big shots in Hollywood, politics and everyfuckingwhere, Dustin Hoffman has a history of sexually harassing young women. While hosting a screening of the film “Wag the Dog”, John Oliver could have down what everyone always does ad play nice with the big movie star. After all, that’s what everyone si there for, to celebrate Hollywood, its films and stars. But Oliver’s conscience just wouldn’t let him do it.

The Last Week Tonight‘s host refused to ignore and bury Hoffman’s legacy of bad behavior, and it made women like me almost weep with joy. (OK, take out the almost; there was actual weeping.) Thank you for believing in, and standing up for, women. A sorely needed counterbalance to Hollywood’s tolerance, Alabama’s denial, Casey Affleck, the President, Roy Moore, the GOP, the RNC, and the F-O-X…and Friends.

Dustin Hoffman has a history of harassing women. A friend told me how back in the early 80s, Dustin Hoffman was auditioning a group of young actresses, including my friend’s BFF.  At the end of the audition Hoffman asked, “Which one of you wants to be the first to suck my cock?”  Maybe the Oscar winner thought this would work; maybe he thought this was simply hilarious. . Recently,  Anna Graham Hunter, Wendy Riss Gatsiounis and Katharine Ross (his co-star in “The Graduate”) have come forward. Ms. Hunter’s account is particularly chilling. When Hoffman’s not  grabbing her ass, he’s asking the 17-year-old about her sex life or riffing on her clitoris. The actor’s treatment of the intern has haunted Anna to this day. At the end of the article she ruminate son what she would tell her young self:

“Last, I wish I could tell her: That pressure you’re always feeling to lighten up, laugh at things, not be hard-nosed? That’s never going to go away. But one day, when you’re in your 40s, you’re going to realize just how good it feels to finally say “Fuck you” to everyone who would.”

This is a sentiment familiar to lots of women like me who are tired of not being tough enough, flexible enough, affable enough, easy-going enough — all at once.  Women are finally feeling free to call men to account for their behavior, their intimidation and abuse. Sometimes karma kicks the  abusing louts in their needy balls…and sometimes the dicks and their dicks are elected to office.

The only way women — and men — can combat predators is to make it so there’s nowhere to hide. We need men like John Oliver. We NEED  awkward but necessary conversations like the one he initiated with Dustin Hoffman.

Oliver is funny but he’s also a very smart, serious and compassionate man. He asked good questions with the right tone. His point seems a simple one: Can we first accept that a woman was hurt because you invaded her personal space and disrespected her in every way you can disrespect a person? Can we acknowledge you continually harassed and offended her dignity without you dismissing her or trivializing her experience?

I get it, Dustin.  You don’t want to be labeled. I get it because neither do women. We don’t want to be punching bags or punch lines, asses for you to garb or owners of labia upon which you feel free to comment. Why can’t you step up and welcome an opportunity to do the right thing for your victims, women in general, and for men to see and perhaps model. Why can’t you welcome the  opportunity to sincerely say you did something that offended, hurt and traumatized and that you are genuinely sorry for doing it and not appreciating how it made women feel.

Men need to start and participate in conversations where they acknowledge they did not pay attention to how their behavior hurt women and how their remarks and actions seriously impact women’s lives. All this talk that just focuses on who was embarrassed, who should be fired or not fired, elected or not elected, is it fair to make movie stars uncomfortable — it all misses the point.

Men need to engage in mature discourse about the real consequences of their behavior on the feelings, freedom, and lives of women.

We ALL need to stop tolerating the sexist and unjust culture that permeates our society.  Movie stars included. Thank you, John Oliver, for listening to women, caring about women, and asking other men to care and listen along with you.